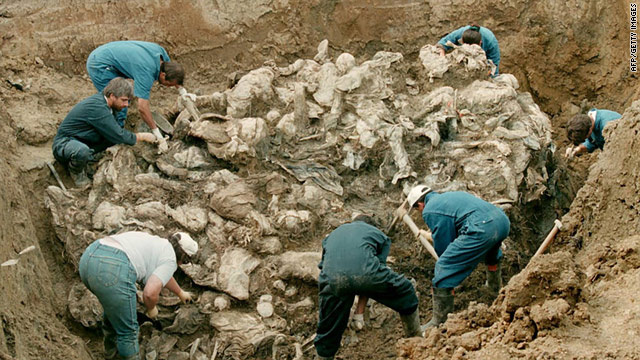 A version of this article by the late Graham Jones first appeared on CNN.com in 2006

(CNN) -- It is now remembered as the worst atrocity in Europe since World War II.

Former Bosnian Serb commander-in-chief General Ratko Mladic, who is accused of direct involvement in the genocide at Srebrenica, was arrested on Thursday after more than 15 years on the run.

A judge at The Hague tribunal was later to describe what happened there as "truly scenes from hell written on the darkest pages of human history."

Thousands of Bosnian Muslims had sought refuge in the spa town of Srebrenica in 1995 as the Bosnian Serb army marched towards them.

They were protected by just 100 lightly equipped Dutch peacekeepers -- who proved no match for the advancing, heavily-armed Serb army.

Denied reinforcements, the Dutch were forced to stand aside while Serb troops intent on "ethnic cleansing" did their worst -- the peacekeepers even witnessing the summary execution of civilians.

In the days before the onslaught, 30,000 Muslims fleeing the advancing Serb army were crammed into the town. Within days there was not one Muslim left.

A great number fled -- only for many of them to be wiped out in Serb ambushes -- but the men who stayed fared the worst.

Thousands of men and boys as young as 10 were rounded up and murdered. Those who tried to hide in their homes were, according to evidence at the trial of Serb General Radislav Krstic at The Hague in March 2000, "hunted down like dogs and slaughtered."

Serbian TV footage shows women and children being separated from the men and put on buses.

In a sickening show of "reassurance" Mladic -- now on the war crimes tribunal's most wanted list -- told the women everyone would be taken out by bus out and safely reunited.

When the cameras were turned off the real face of the Serb army emerged as the slaughter began.

More than 60 truckloads of refugees were taken from Srebrenica to execution sites where they were bound, blindfolded, and shot with automatic rifles.

Some of the executions were carried out at night under arc lights. Industrial bulldozers then pushed the bodies into mass graves.

Some were buried alive, a French policeman who collected evidence from Bosnian Muslims, Jean-Rene Ruez, told The Hague tribunal in 1996.

He gave evidence that Bosnian Serb forces had killed and tortured refugees at will. Streets were littered with corpses, he said, and rivers were red with blood. Many people committed suicide to avoid having their noses, lips and ears chopped off, he said.

Among other lurid accounts of mass murder, Ruez cited cases of adults being forced to kill their children or watching as soldiers ended the young lives.

Later it was revealed that Mladic had been able to press on unhindered by issuing ultimatums to the U.N. protection force.

It was suggested the U.N. high command had promised to stop air strikes against the Serb army in return for the release of 370 U.N. soldiers held prisoner -- and Mladic took this as the green light to attack Srebrenica.

The Commander of the Dutch U.N. troops, Col. Thomas Karremans, told The Hague tribunal in 1996 that he had first requested NATO air strikes when Mladic's troops began their assault on July 6, but that the request was not granted until July 11 when Srebrenica fell. By then, Karremans said, it "was too late and too little."

Karremans said a long Serb blockade before the attack had left the lightly armed Dutch battalion desperately short of food and fuel, but requests for fresh supplies went unheeded.

In 1999 the U.N. admitted its error in expecting 100 Dutch troops to deter the Bosnian Serb army.