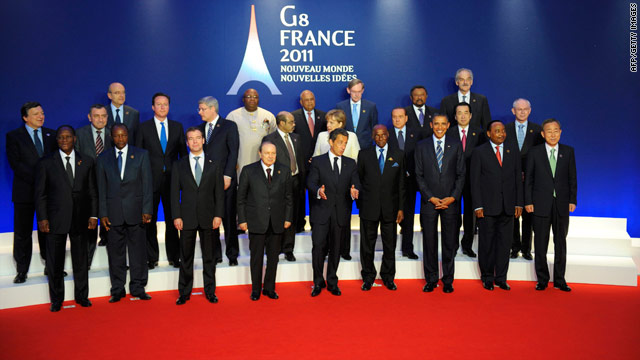 (CNN) -- Leaders at the Group of Eight summit in France expressed their support for democracy activists in the Middle East and North Africa on Friday but stopped short of pledging money to support them.

The G8 leaders raised the possibility that multilateral development banks could provide more than $20 billion to support reforms in Egypt and Tunisia, where popular uprisings dislodged authoritarian rulers.

French President Nicolas Sarkozy said the amount of aid could reach $40 billion. In addition to the possible $20 billion, he cites about $10 billion in bilateral commitments not mentioned in the G8 summit's communique and $10 billion in contributions from Gulf Arab states such as Saudi Arabia, Qatar and Kuwait.

"The changes under way in the Middle East and North Africa are historic and have the potential to open the door to the kind of transformation that occurred in Central and Eastern Europe after the fall of the Berlin Wall," the G8 leaders said in a statement.

"The aspiration of people for freedom, human rights, democracy, job opportunities, empowerment and dignity, has led them to take control of their own destinies in a growing number of countries in the region."

The G8 is made up of the United States, France, the United Kingdom, Germany, Japan, Italy, Canada, and Russia. They meet regularly to coordinate actions on a range of issues. The United States will host the annual G8 meeting next year.

In a statement, the G8 unveiled an initiative called the Deauville Partnership -- named for the city in France where the leaders met. It seeks to address the Arab Spring, the wave of anti-government demonstrations that started in Tunisia and have since roiled several countries in the Middle East and North Africa, including Egypt, Syria, Yemen and Bahrain.

The partnership focuses on political reform and economic growth.

"We met with the prime ministers of Egypt and Tunisia, and decided to launch an enduring partnership with those countries engaging in a transition to democracy and tolerant societies," the G8 leaders said. "Our common goal is to develop the rule of law and citizen engagement as well as foster economic and social reforms to meet the aspirations of the people."

The partnership hopes to generate economic transition and integration into the regional and global economy. The G8 leaders asked senior foreign and finance ministries to meet in coming months to forge a framework for the effort.

"While Egypt and Tunisia registered economic growth over the past decade, these gains were not widely disbursed. Over the medium and long term, the United States and other members of the G8 commit to support partnership countries in addressing underlying economic challenges in order to broaden economic opportunity," the G8 said.

The group also intends to help Egypt and Tunisia recover stolen assets, and it praised the work of both countries to present their economic plans of actions to international donors.

The group also focused on creating "the political space for democracy" and promoting freedom of expression. It is also committed to tackling illiteracy and unemployment .