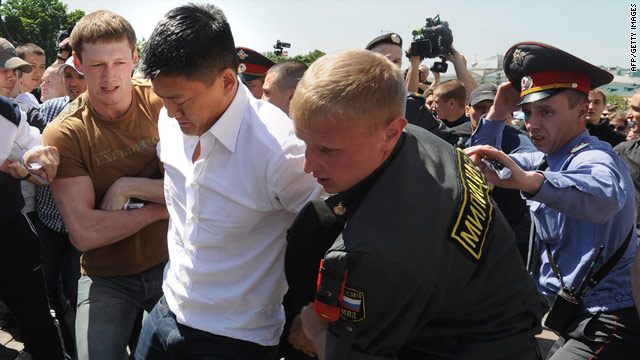 (CNN) -- More than 30 people were arrested Saturday in central Moscow during the sixth attempt by gay rights groups to hold a parade in the city.

According to the group, Gay Russia, far right groups clashed with activists who were gathered in front of the Kremlin wall and city hall.

A police spokesman told CNN that the group did not have permission to gather publically for a parade.

"We have been asking for the last six years to gather. We are being deprived of a very simple right that is taken for granted in democratic countries," Nikolai Alexeyev, Head of Gay Russia, chief organizer of the Moscow Gay Pride Parade told CNN.

Alexeyev said as soon as activists took out their banners and flags, dozens of members of an ultra-Orthodox group attacked the activists.

Gay rights flags and banners that read 'Russia is not Iran' were displayed in the crowd.

Last week the city denied the group a parade permit due to "a number of complaints", Moscow's deputy mayor, Luydmila Shevtsova said, according to reports from national new agency Ria Novosti.

Representatives of religious groups, ultra-nationalists and the Moscow City Parent Committee had filed complaints against the parade.

This past October, the European Court of Human Rights fined Russia for banning gay parades in the capital.