Clashes break out as Serbian nationalists protest arrest of Mladic 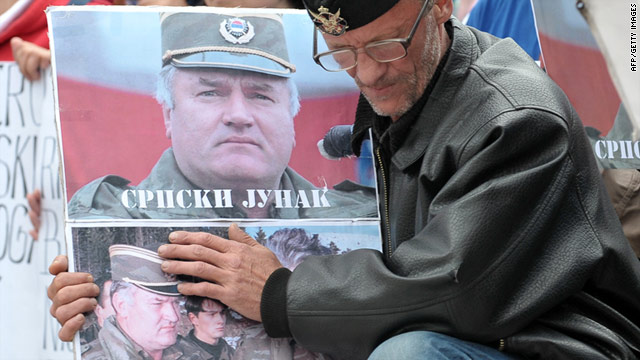 Belgrade, Serbia (CNN) -- Clashes between Serbian police and protesters broke out Sunday in Belgrade after an ultranationalist party demonstrated against the arrest of genocide suspect Ratko Mladic.

Nearly 20 people were injured in the violence -- seven police and 12 civilians -- according to police. They said they made more than 100 arrests.

Mladic, wanted by the International Criminal Tribunal for the former Yugoslavia in connection with the 1995 Srebrenica massacre, was captured Thursday after nearly 16 years in hiding.

Despite calls for calm from the event's organizers, demonstrators on the fringes of the rally threw rocks at police.

Hundreds of officers, some in riot gear and others on horseback, moved in against the crowd. Some beat and kicked protesters. Police stayed on the streets as the demonstrators scattered.

Mladic: A ruin of a man?

"We are gathered here to peacefully protest the betrayal by (Serbian President) Boris Tadic and his bosses in Brussels," party leaders told the crowd before the clashes erupted. "We have had enough economic humiliation by our enemies, who are destroying our country ... in every way."

At the protest -- which was attended by members of Mladic's family and thousands of others -- speakers demanded that Tadic step down and asked that elections be held immediately.

Mladic's son, Darko, told the crowd that his father is sick. "He needs medical treatment that he is not getting," the younger Mladic said.

He described his father as "a freedom fighter," and said he had "defended his own nation, defended his people, which was his job."

The younger Mladic called on protesters to keep their demonstration peaceful. "Tomorrow if I'm able to visit my father, I will tell him of this and he will cry again," he said.

Mladic gave himself up without a fight, despite having two handguns, according to Rasim Ljajic, the government minister in charge of searching for fugitive suspected war criminals.

Officials located Mladic in a village called Lazarevo, north of the Serbian capital, after culling information from his former comrades, those who supported him financially and his close family members, Ljajic said.

It is not clear what source led investigators to the former military commander, accused of ordering the 1995 massacre of some 8,000 Muslims in the eastern Bosnian town of Srebrenica.

His arrest clears a major hurdle that once stood between Serbia and its long-awaited entrance into the European Union, but the move could also usher in political backlash from the country's electorate, some of whom consider Mladic a hero.

"We're conscious of this danger," Ljajic told CNN Saturday. "We know we did something that didn't bring us joy or applause from the public. But we also know that we took great responsibility and did something that the political elite of any country is supposed to do."

He called Mladic's capture "a political investment," noting the government's desire to bring the war crimes suspect to justice "even if citizens punish us in the next elections."

The massacre at Srebrenica, which sparked international outcry and preceded a NATO bombing campaign, is now remembered as the worst atrocity in Europe since World War II.

Mladic allegedly presided over the five-day slaughter in July where Muslim men and boys were systematically executed in what was described at the U.N. war crimes tribunal as "the triumph of evil."

Mladic's forces encircled the town, a U.N.-declared "safe area" where thousands of Bosnian Muslims had sought refuge, allegedly conducting wholesale slaughter and rape, despite the presence of a few hundred lightly armed Dutch U.N. peacekeepers charged with protecting the area's residents and its refugees.

The former general is considered the last of the fugitive war criminal suspects in the region, following the capture of Bosnian Serb leader Radovan Karadzic and former Serbian President Slobodan Milosevic, who died in jail in 2006 during his trial at The Hague.

A medical team has determined that Mladic is healthy enough to be extradited to face a war crimes tribunal, a court spokeswoman in Belgrade said Friday.

While the war crimes suspect suffers from several chronic conditions, the team said there are no immediate problems barring a move.

This comes after five doctors examined Mladic Thursday night, according to the ex-general's lawyer, Milos Saljic.