By Camilla Fuhr Nilsson, For CNN 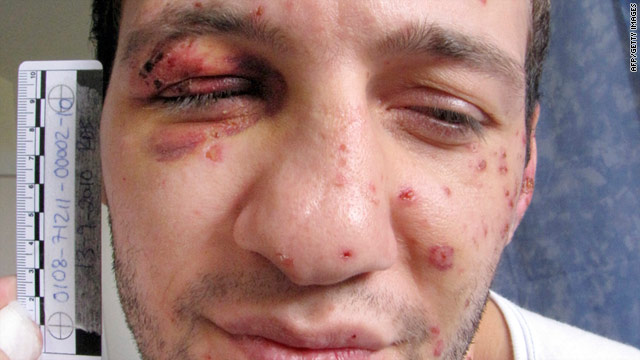 Danish police photograph shows Lors Doukaev with the scars he sustained when he set off a bomb.
STORY HIGHLIGHTS
RELATED TOPICS

According to the court documents Lors Doukaev intended to send a letter bomb to Danish newspaper Jyllands-Posten but accidentally set off the bomb material in Copenhagen Hotel Jorgensen where he was staying last September.

The blast destroyed the bathroom and injured Doukaev, who ran into a nearby park. Police surrounded him in the park and the bomb squad detonated a pouch he was wearing.

In addition to the conviction for attempted terrorism, he was also found guilty of carrying a pistol. He could be sentenced to up to 16 years in prison. Sentencing will be Tuesday.

Doukaev traveled to Denmark on September 7 under false name and booked a room on Hotel Jorgensen under a false name. He said in court that he had a pistol and a bomb for personal security reasons

Jyllands-Posten triggered global protests and controversy in 2005 when it published 12 drawings of the Muslim Prophet Mohammed. The controversy grew in early 2006 when a Norwegian newspaper reprinted the drawings. Islamic law generally bans any depiction of Mohammed.