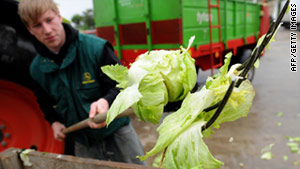 A farmer in central Germany throws out lettuce after suspicion was raised about E. coli contamination.

The first investigation results released by the German federal unit responsible for disease control and prevention -- the Robert Koch Institute, under Germany's Ministry of Health -- indicated that the most recent infections were likely caused by consuming raw tomatoes, cucumbers and lettuce.

The agency said it is advising consumers to avoid eating those foods, specifically in northern Germany.

The institute is investigating six deaths, according to the World Health Organization. Three of those fatalities, all adults, were caused by hemolytic-uremic syndrome, or HUS, from E. coli. The other three fatalities -- all of them elderly -- were caused by an infection linked to HUS and E. coli, said Dr. Guenael Rodier of the World Health Organization.

The European Centre for Disease Prevention and Control said 329 cases of HUS have been reported since May 2. Though HUS is normally seen in children younger than 5, the vast majority of the current outbreak's cases are adults, and more than two-thirds are women, the center said Monday on its website.

"The source of the outbreak is under investigation, but contaminated food seems the most likely vehicle of infection," it said.

Most of the patients are from, or have been to, northern Germany, primarily Hamburg, Northern Lower Saxony and Mecklenburg-Western Pomerania, it said.

Cases have been reported in Sweden, the United Kingdom, Netherlands and Denmark among people who have visited Germany, most of them northern Germany, it said.

The European Food Safety Alert Network said EHEC, or enterohemorrhagic Escherichia coli, a strain of E. coli that causes hemorrhage in the intestines, was found in organic cucumbers originating from Spain, packaged in Germany, and distributed to countries including Austria, the Czech Republic, Denmark, Germany, Hungary, Luxembourg and Spain.

The Spanish Agency for Food Safety and Nutrition issued a statement saying that two Spanish companies producing cucumbers may be involved in the outbreak, and the agency is awaiting further results from Germany's investigation.

"This is the eye of the storm," said Oliver Grieve, a spokesman for the University Medical Centre Schleswig-Holstein, where one of the deaths occurred. "We're working 24 hours here, and we're getting patients from all over northern Germany including Hamburg."

As of Monday, 115 patients were infected with EHEC -- 68 in the medical center's Kiel campus and 47 in its Lubeck campus. Eighty-two patients were stricken by HUS -- 42 in Kiel and 40 in Lubeck, he said.

The fatality, an 86-year-old woman, died of HUS; her husband remains hospitalized with EHEC, Grieve said.

"Patients are coming in waves," he added.

Cases of bloody diarrhea associated with HUS were first reported in Germany in the second week of May. The detection of E. coli on cucumbers was first reported on May 26.

Germany's Federal Ministry of Food, Agriculture and Consumer Protection advised consumers to cook their food to a minimum temperature of 70 degrees Celsius (about 160 degrees Fahrenheit) for at least two minutes to kill any E. coli bacteria. Freezing food does not kill bacteria reliably, the ministry added.

Russia said Monday it is suspending all imports of vegetables, including tomatoes, cucumbers and salad leaves, produced in Germany and Spain.

The Russian Federal Agency for Health and Consumer Rights, Rospotrebnadzor, said on its website that it has not received information from the European Union on the causes of the infection and the measures taken to "localize and eliminate the outbreak."

"A decision might be taken in the next few hours regarding the ban on imports and sales of vegetables in Russia from all EU countries," the agency said.