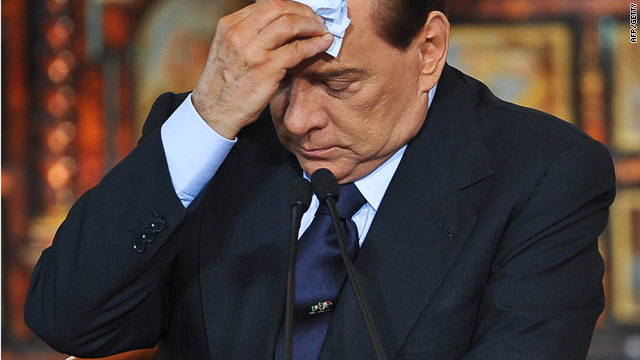 Milan's turn to the left is a powerful setback for Berlusconi. Milan is his hometown and his political stronghold, and it has been led by a center-right mayor for the past two decades

In Milan, official voting results issued Monday by the Italian Interior Ministry gave the left-wing candidate, Giuliano Pisapia, about 55% of the vote over the incumbent mayor and center-right candidate Letizia Moratti, who had nearly 45% in Sunday's balloting. In Naples the left-wing candidate, Lugi De Magistris, was winning with 65% of the vote against the 34% of the center-right candidate, Gianni Lettieri. Whichever candidate winds up with more than 51% wins becomes the new major.

Supporters of leading candidates in both Milan and Naples began celebrating their apparent victories even before the final official voting count was over.

Political analysts have said that these local elections were a referendum on the Italian premier, who has been battling to hold his coalition together over the past six months as he fought various corruption trials, as well as a current trial in which he faces charges of abuse of power and prostitution with an underage teenager. That trial resumes tomorrow in Milan.

The voting was the second round of the process. The shock, many say, came two weeks ago, May 14 and 15, when the first ballot round took place and it became clear that his hometown had been lost or was at serious risk.

The Italian premier was on a two-day visit to Romania on Monday and had not released any comments on the election results, But many of his party members, including a minister, have said that this is a time for reflection.

An editorial in Italian leading newspaper,Corriere della Sera, Monday summed it up:

"The premier has already faced the worst-case scenario. His party looses in Milan and in Naples. A double blow with strong political consequences, both real and of the country's image. Is he worried? They (his political aides) assure us NO. or at least, no more. ....his mind is already in tomorrow."