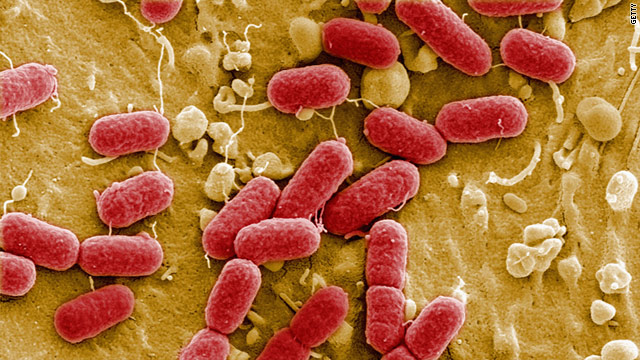 A particularly virulent strain of E. coli has killed at least 16 people and sickened many others.
STORY HIGHLIGHTS

(CNN) -- An outbreak of E. coli in Germany that has killed at least 16 people and left hundreds battling infection in 10 countries raises questions about what risks the infection continues to pose and what fallout it will cause.

Where did the infection come from?

The source of the E. coli outbreak is still unknown. It was initially linked to cucumbers imported to Germany from Spain, but Robert Kloos, Germany's agriculture minister, is reported to have said that tests have cleared the Spanish cucumbers.

The European Center for Disease Prevention and Control (ECDPC) says transmission of the strain of bacterium, commonly found in cattle, usually occurs through contaminated food or water and contact with animals.

What food types are affected and from where?

With suspicion moving away from cucumbers, it is unclear what foodstuffs present a risk. There were concerns over all raw vegetables, particularly salad ingredients such as lettuce and tomatoes normally eaten without cooking.

Who are the victims?

The ECDCP says the bacteria's impact on individuals can be affected by their age with children under five usually at higher risk of developing disease and dying from infection.

However, statistics published on May 27 showed that of 276 cases, 87% were adults and 68% were women. One hospital in Hamburg said it had up to 700 infected patients. Of 85 people at risk of renal failure, 20 are children and 65 are adults. Sweden, which appears to have the biggest cluster of cases outside of Germany, has reported several dozen people hospitalized.

What is E. Coli?
Escherichia coli (E. coli) is a bacteria found living in the intestines of people and animals. It can be transmitted through contaminated water of food -- especially raw vegetables and undercooked meat.

It is usually harmless, but can cause brief bouts of diarrhea. Some nastier strains can cause severe diarrhea and followed by serious organ system damage such as kidney failure. Healthy adults usually recover within a week, but young children and older adults can develop a life-threatening kidney failure.

Why is this strain so deadly?

The European Food Safety Alert Network identifies the bacteria linked to the contaminated cucumbers as EHEC, or enterohemorrhagic Escherichia coli, a strain which is particularly virulent and resistant to antibiotics.

In Hamburg, up to 30% of people admitted to hospital with the infection were said to have developed haemolytic-uremic syndrome, a life-threatening form of kidney failure.

Scientists at the Beijing Genomic Institute said the outbreak of infection in Germany is caused by a new "super-toxic" E. coli strain, though the U.S. Centers for Disease Control and Prevention said the strain has been seen before. "We have very little experience with this particular strain, but it has been seen before," said Robert Tauxe, deputy director of the CDC's division of foodborne diseases.

How far has it spread?

The ECDPC says the outbreak it is the largest in the world of its kind. Across Europe, 499 cases of HUS and 1,115 cases of EHEC have been reported, WHO said on its website.

In addition to Germany and Sweden, cases have been identified in Austria, Denmark, France, Netherlands, Norway, Spain, Switzerland and the United Kingdom.

What advice is being given to consumers?

Germany has advised people to avoid all raw vegetables, particularly cucumber, lettuce and tomatoes. Advice has varied from country-to-country, but others have also issued food alerts. The ECDPC says there is a risk of person-to-person transmission from people carrying the infection. "Personal hygiene messages are important," it says.

What is the economic fallout?

With exports of Spanish vegetables "paralyzed" according to officials, weekly losses of about €200 million ($288 million) are predicted. There are also concerns about the long-term impact this will have on Spain's fruit and vegetable market, last year worth €8.6 billion.

Producers have already reported that seeded fruit exports are being affected, despite being unrelated to the scare. In addition to Germany, a number of European countries including Russia and Belgium have banned vegetable imports from Spain.

Russia also announced a ban on fresh vegetable imports from the European Union, state media reported Thursday. Russian customs officials have been instructed to prevent the produce from entering the country, according to Gennady Onishchenko, head of the Russian Federal Agency for Health and Consumer Rights, while stores have been told to withdraw European vegetables.

Germany has reportedly also drastically reduced imports from the Netherlands. The cucumber alert could also have diplomatic fallout, with producers urging Spain's prime minister to step in, complaining German authorities have condemned Spanish produce without proof.

Leire Pajin, the Spanish Health Minister, has discussed the outbreak on Twitter, saying: "In the absence of proof, we're not ruling out using all necessary measures to make sure there's compensation for the (economic) damage," she wrote. "From the first day, the government launched a diplomatic offensive to prevent the linking of this health crisis with our products."