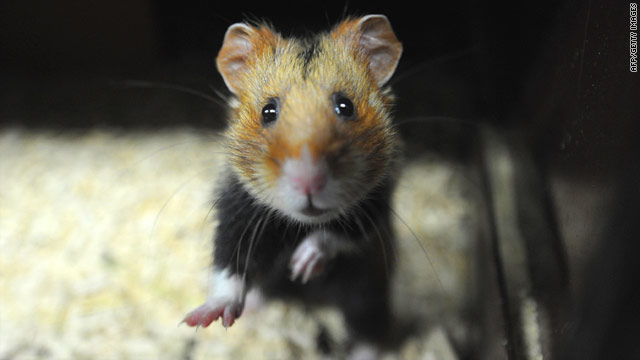 A Great Hamster of Alsace is pictured at a breeding center in eastern France dedicated to the reintroduction of the specimen.
STORY HIGHLIGHTS

(CNN) -- France is facing fines and penalties after Europe's highest court found the government has failed to do enough to protect its hamsters.

In a case that stretches back three years, the European Court of Justice said Thursday that the French government hasn't adequately conserved the remaining few hundred Great Hamsters of Alsace still living in a small enclave in eastern France.

"The court finds that the measures implemented by France in 2008 were not adequate to enable effective avoidance of deterioration or destruction of the breeding sites and resting places of the European Hamster," the ECJ said in a statement.

The little 10-inch rodents are considered pests by farmers there, and were trapped, poisoned almost out of existence by the early 1990s when they got official protection.

But as the last surviving example of hamster left in western Europe, the court says they deserve better protection in line with the suit by European Commission regulators.

"The commission complains that in 2008, France failed to take adequate measures to ensure strict protection of the European Hamster in Alsace (France), the only region where it is present," the court said.

The hamster is at risk of extinction as a result of harmful agricultural practices and urbanization, which disturb its breeding and resting places, according to the court.

Changing farming practices combined with encroaching building and urbanization in recent decades have led to the destruction of nearly all their burrows along the rivers there, leading to a population collapse.

The commission said the switch to summer-ripening maize in many farms had further harmed the population because when the white-pawed, black-bellied hamsters wake up from hibernation in the spring, there's no seed to eat.

And while the court praised a move to grow winter crops and alfalfa that the hamsters like to munch on, it found that the government-backed moves were too little and too late.

There are only about 800 of the animals still alive, but that's several times more than were alive just a few years ago.

Still, the court determined that there had to be nearly twice the current number of the little creatures to sustain their population.

The French Ministry of Agriculture was not immediately available for comment.