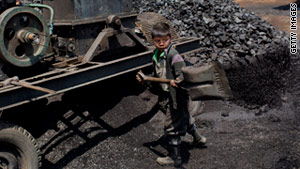 (CNN) -- Every minute of every day, a child laborer somewhere in the world suffers a work-related accident, illness or trauma, the International Labor Organization said Friday.

An estimated 115 million children worldwide work in hazardous jobs, said the U.N. agency in a report issued ahead of the World Day Against Child Labor on Sunday.

That figure represents more than half of the world's roughly 215 million child laborers, who work in everything from mining and construction to agriculture and manufacturing, the study showed.

"Despite important progress over the last decade, the number of children in child labor worldwide -- and particularly in hazardous work -- remains high," ILO Director-General Juan Somavia said in a statement. "Tackling work that jeopardizes the safety, health or morals of children must be a common and urgent priority."

The study showed that although the overall number of children in hazardous work fell between 2004 and 2008, the number of children between the ages of 15 and 17 engaged in that type of work actually increased 20% during the same period.

Children have higher rates of injury and death at work, as compared to adults, and can be particularly vulnerable as their bodies and minds are still developing.

The largest number of children in hazardous jobs is in Asia and the Pacific, the report said, where children in that type of work represent 5.6% of all kids. Asia is followed by Latin America and the Caribbean and sub-Saharan Africa, where 6.7% and 15.1% of all children, respectively, have perilous jobs, the ILO said.

Still, the U.N. agency stressed the problem of children in dangerous work is not limited to developing nations.

Its report cited a 2010 Human Rights Watch study, which looked at the issue of child labor in U.S. agriculture.

"(When I was 12) they gave me my first knife. Week after week I was cutting myself. Every week I had a new scar. My hands have a lot of stories," Jose M., 17, told researchers.