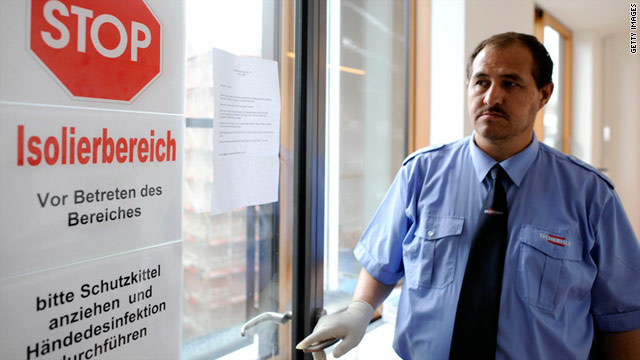 A sign at the entrance of a hospital isolation area in Hamburg, Germany, warns people of E. coli-infected patients.
STORY HIGHLIGHTS
RELATED TOPICS

All but one of the deaths were in Germany, with the other occurring in Sweden, according to the World Health Organization and the European Center for Disease Prevention and Control.

The number of people infected with E. coli as of Sunday was 3,256, according to the European center (ECDC). Of those, 812 have the severe form of the intestinal illness.

All but five people had traveled to or lived in Germany during the incubation period for infection, typically three to four days after exposure, the WHO said.

The agricultural ministry in Lower Saxony said Sunday that it is still not clear how sprouts from a farm in the state became contaminated with the bacteria.

"It is not clear whether an employee brought the bacteria into the company or whether it was brought in with seeds which then contaminated the worker," the ministry said in a statement.

"Finding this out is important, however, so that we can create early warning systems to prevent such outbreaks in the future," the statement said.

Investigators found bean sprouts were the cause of the outbreak when 17 people became ill after eating at the same restaurant, said Reinhard Burger, president of the Robert Koch Institute, which is responsible for disease control and prevention in Germany. Only those who ate food containing the sprouts became ill, he said.

Farmers in Spain, France, the Netherlands and Belgium have been seeking compensation for their losses. The European Commission has proposed that the European Union pay about $300 million, but Spain alone claims about $600 million in losses.

In Spain, the produce exporter Frunet filed suit last week over the Hamburg state government's initial claims that Spanish produce was to blame for the outbreak. The company, based in Spain's southern Malaga province, expects to file another suit against the government seeking 1 million euros, or $1.4 million, in losses from fresh produce it had to destroy, Frunet owner Antonio Lavao told CNN. Health officials first blamed Frunet's organic cucumbers for the outbreak.

CNN's Al Goodman and Frederik Pleitgen contributed to this report.