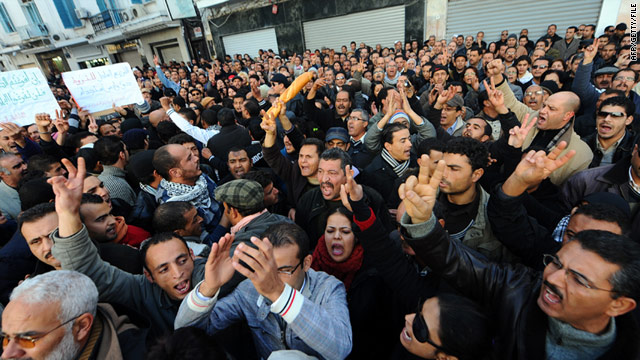 Protests that erupted in December in Tunisia over food prices and unemployment eventually spread around north Africa.
STORY HIGHLIGHTS

(CNN) -- People around the world are changing their diets because of soaring food prices, according to a new study.

The majority of people in most countries surveyed by international aid agency Oxfam said they're no longer eating the same kind of food as they did two years ago, with 39 percent globally blaming rising food costs and another 33 percent citing health reasons.

The poll also shows the effects of globalization on the world diet, with both pasta and pizza ranked among the top three favorite foods in many countries.

The United States, Russia and India were among the 17 countries surveyed.

"Our diets are changing fast and for too many people it is a change for the worst," said Jeremy Hobbs, Executive Director of Oxfam. "Huge numbers of people, especially in the world's poorest countries, are cutting back on the quantity or quality of the food they eat because of rising food prices."

High and volatile food prices represent an increasingly large and unpredictable proportion of household income in developing countries, according to Abolreza Abbassian, an economist for the U.N.'s Food and Agriculture Organization (FAO).

"People in poorer countries are already eating once a day, so when prices go up, people spend all their income on food," Abbassian told CNN. "They can't have more income, so the only thing they can do is eat less or more inferior food."

While food costs have hit the developing world the hardest, the West is not immune to the effects of rising prices. In the United States, 55 percent of respondents said they no longer eat the same kinds of food they did two years ago, and 31 percent attribute the change to food prices.

After 30 years of relatively constant prices, the cost of food staples like grains, meats and sugar soared in mid-2008, with experts blaming everything from extreme weather to biofuel production and shortsighted economic policies.

In February of this year, the U.N. Food Price Index -- a number representing the average prices of five main foods including meat, dairy and cereals -- hit an all-time high of 238, nearly 20 percent higher than during the 2008 food crisis.

Another 44 million people worldwide were driven into poverty due to high food prices since June 2010 -- in addition to the 1.2 billion people already living below the poverty line of $1.25 a day, according to the World Bank.

Abbassian said the FAO doesn't expect much in the way of price relief anytime soon.

"Between now and 2020, the likelihood of prices in real terms declining is very, very little" due to the lack of fundamental changes in the global agricultural market, said Abbassian.

Part of the reason for this, said Abbassian, is the five billion people in the world who aren't below the poverty line.

"Prices today, as high as they may seem, may not seem high to people in emerging economies, so they carry on buying, and you're not getting price rationing," said Abbassian, referring to the point where food becomes so expensive that people stop buying it.

"The danger is that these people keep paying regardless of the price, and they are increasing the price of the food for people who can't afford it even more."

According to Abbassian, since the free market food system cannot look after the world's poorest people, one solution would provide targeted aid to subsidize food prices for those under the poverty line.

The agricultural ministers of the G-20 countries are due to meet in Paris next week to discuss food prices -- and while previous meetings have yielded little, Abbassian expressed optimism that this time would be different.

G-20 countries have "realized that food prices are a problem, and that this problem cannot be solved by pledges and empty promises," said Abbassian. "And that is quite a striking difference from the past."