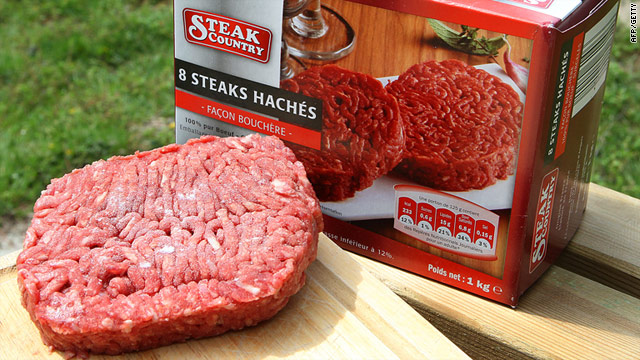 Authorities identified frozen ground beef sold in Lidl stores under the brand Steak Country as linked to the infections in Lille.
STORY HIGHLIGHTS

All seven, aged from 18 months to 8 years old, are being treated in a hospital for hemolytic uremic syndrome (HUS) -- a form of kidney failure related to a rare form of E. Coli -- according to the Nord-Pas-de-Calais regional health agency.

The infection is not thought to be linked to a recent deadly E. Coli outbreak centered in Germany.

The children are in a "serious" condition but their lives are not in danger, local media reports say.

French health agency spokesman Joelle Perrin said in a televised press conference that the strand of E. Coli was not the same as that found in German bean sprouts.

The German outbreak has led to nearly 3,350 cases of HUC, resulting in 37 deaths as of June 14, according to the World Health Organization. Almost all those cases were in people who had travelled to or lived in Germany.

French regional health authorities have identified frozen ground beef sold in Lidl stores under the brand Steaks Country as linked to the infections in Lille.

They have asked the manufacturer, SEB, to recall boxes of ground beef with sell-by dates of May 10-12, 2012. SEB has not yet issued a statement on the recall.