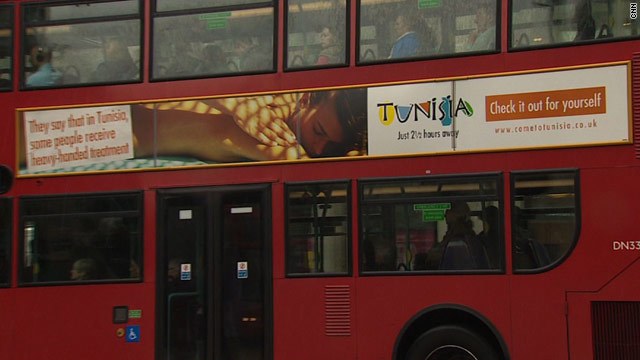 A bus in London carrying one of the controversial Tunisian adverts -- its makers said they wanted to create a debate.
STORY HIGHLIGHTS

London (CNN) -- The dust may only just have settled in Tunisia after the Jasmine Revolution, but that has not stopped the launch of a highly provocative marketing campaign designed to entice British and French holidaymakers to the country.

Adverts humoring the historic events of just a few months ago -- in which at least 300 people were killed according to the U.N., and which unleashed a wave of pro-democracy movements across the Middle East --have sprung up on London's famous red double-decker buses and Paris metro stations.

One of the adverts shows a woman being massaged next to the words: "They say that in Tunisia some people receive heavy-handed treatment."

In another one, ancient Roman ruins are juxtaposed alongside this caption: "They say Tunisia is nothing but ruins."

The company behind the campaign, Memac Ogilvy, defended using the recent revolution in a humorous context.

Nicolas Courant, creative director of Memac Ogilvy in Tunis, said: "We wanted to create a debate, it is a way to drive awareness... there is a perception in Europe of there still being a security problem in Tunisia.

"We wanted to do something with our Tunisian humor, it is a nice way to show how things have changed... it is OK to live here, we are living here."

Income from tourism is a significant part of the Tunisian economy but slumped during the uprising.

Visitor numbers are slowly recovering, according to figures from the Tunisian National Tourist Office in London, but they are still expected to be 50% down on 2010, says Mehdi Houas, the Tunisian Trade and Tourism Minister.

"It's been terrible. The only sector affected was tourism, and of course (related) work. But it's terrible for the economy as a whole because it's 50% of our foreign exchange," Houas told Reuters.com

Fed up with corruption, unemployment and escalating prices of food, people began demonstrating en masse after the self-immolation suicide of a fruit cart vendor in December.

The revolt led to Ben Ali's ouster and triggered a wave of protests against longtime rulers across North Africa and the Middle East.

Ben Ali will be tried in absentia next week, the country's interim prime minister said Tuesday. He has said he is a victim of "injustice" and denies allegations he has improper bank accounts or property holdings outside of Tunisia.

The former leader called various charges against him "nothing but a masquerade with the only purpose of illustrating a symbolic break with the past."