A dissident in her own right, Andrei Sakharov's wife dies at 88 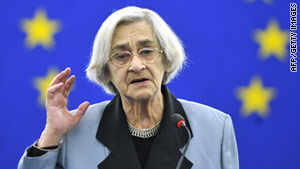 (CNN) -- Elena Bonner, the wife of late Soviet dissident Andrei Sakharov who gained worldwide acclaim after smuggling her husband's writings out of exile, died Saturday in Boston, her daughter said in a statement. She was 88.

Bonner's ashes are be interred at a Moscow cemetery next to her late husband's remains, said her daughter, Tatiana Yankelevich.

Bonner's life revolved around the political struggles that characterized the Soviet Union in the 20th century. She joined forces with Sakharov in the early 1970's.

Bonner was born in 1923 in Turkmenistan into a family of prominent Communist Party officials, according to a biography posted on Harvard University's website. Her father was killed in Stalin's purges during the "Great Terror" of the late 1930s, and her mother was interned in a gulag for 10 years.

Bonner was twice wounded during World War II while serving as a nurse for the Soviet military. She became a physician after the war.

She married Sakharov, known for his work on the development of the atomic bomb for the Soviet Union, in 1972, according to the Andrei Sakharov Foundation website.

Bonner followed Sakharov into exile in Gorky, in western Russia, in 1980. She was permitted to take trips to Moscow, which enabled her to smuggle Sakharov's critical writings on the Soviet Union out of exile.

Bonner was convicted of "anti-Soviet agitation" in 1984 for smuggling Sakharov's writings and lost her travel privileges to Moscow. She was confined to Gorky with her husband.

Mikhail Gorbachev ended Bonner and Sakharov's exile in 1986 by inviting them to return to Moscow, according to the Andrei Sakharov Foundation.

Bonner, a founding member of the Moscow Helsinki Group in 1976, received the Rafto Prize in 1991 for her promotion of human rights in the former Soviet Union and contemporary Russia, according to the foundation.

She moved to the United States to be with her daughter after Sakharov's death in 1989. She published at least four books on her life as a dissident, according to the Harvard website.

"It is with great sadness that I heard" of Bonner's passing, European Commission President Jose Manuel Barroso said in a statement, describing her as a human rights activist and author.

"She stood side by side with her husband in the fight for political freedom, democracy and human rights in the former Soviet Union, and all over the world. I want to pay tribute to the courage she showed in standing up for fundamental freedoms and human dignity that people worldwide demand."