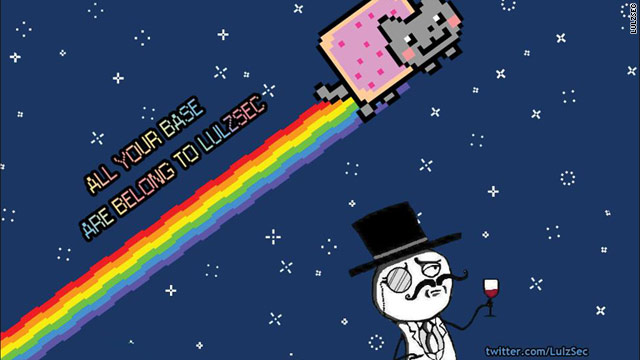 The group Lulz Security, or LulzSec, takes credit for hacking Sony's PlayStation Network. This photo is from their website.
STORY HIGHLIGHTS

London (CNN) -- A teenager has been arrested near London in connection with the hacking of Sony, London's Metropolitan Police said Tuesday.

The 19-year-old is suspected of hacking into systems and mounting denial of service attacks against "a number of international businesses and intelligence agencies," police said.

Naming suspects who have been arrested is illegal in Britain.

A police spokesman, who declined to be named in line with custom, said the arrested man's computers will be examined for activities related to hacks against the UK's Serious Organized Crime Agency, the CIA and Sony.

Sony's PlayStation Network went down on April 20 after what Sony said was a massive data breach. It had more than 70 million subscribers at the time.

It began coming back online in mid-May. The PlayStation Store did not reopen until June 2.

The company estimated the cost of that attack will total $171 million.

Hackers later broke into Sony Pictures' website, compromising the accounts of over 1 million users, and the gaming company Sega, stealing nearly 1.3 million users' details via a British subsidiary of the Japanese company. Sega makes games for PlayStation and other gaming systems.

The suspect's computer will also be examined for links to LulzSec, another police spokesman told CNN, who also declined to be named in line with custom.

"This link has not been established yet as it is still early days," the spokesman said.

The hacker group LulzSec posted an irreverent denial that its leader was the one arrested.

"Seems the glorious leader of LulzSec got arrested, it's all over now ... wait ... we're all still here! Which poor bastard did they take down?" they said on Twitter several hours after the announcement of the arrest.

LulzSec claimed recently to have attacked the CIA website, and took credit for hacking into the website of the American public broadcaster PBS and posting a fake story saying the rapper Tupac Shakur was still alive. He was killed nearly 15 years ago.

It's unclear whether LulzSec members played a role in the Sony PlayStation Network breach.

But they have posted on their website what they claim is proprietary information from Sony Pictures and other Sony properties' websites.

"The main anti-LulzSec argument suggests that ... our actions are causing clowns with pens to write new rules for you," the group wrote. "But what if we just hadn't released anything? What if we were silent? That would mean we would be secretly inside FBI affiliates right now, inside PBS, inside Sony ... watching ... abusing ... ."

The teen suspect was arrested in Essex, outside London, in a raid that police said was "intelligence-led."

The suspect was arrested Monday night and police are now examining a "significant amount of material," they said.

CNN's Per Nyberg, Carol Jordan and Doug Gross contributed to this report.