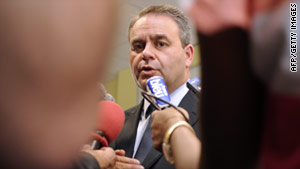 Paris (CNN) -- The strain of E. coli blamed for 46 deaths in Germany appears to have resurfaced in France, the French Ministry of Health said.

The new outbreak has sickened eight people, who went to two hospitals in Bordeaux, authorities said.

Officials interviewed seven of them, all of whom reported having attended an open house at a children's recreation center. Six of them reported having eaten sprouts during the visit, "particularly used in decoration of a gazpacho," the health ministry said.

Two of the eight patients have hemolytic uremic syndrome. The strain of E. coli isolated from one of them "has the same characteristics as the strain responsible for a large epidemic" of enterohemorrhagic E. coli in Germany over the past several weeks, which has been blamed on sprouts, the ministry said in a statement.

The seeds for the sprouts consumed at the recreation center were planted and grown in France, officials said.

An investigation found the seeds were supplied by a British company, but no definitive link has been established, an official with France's economy ministry said.

A "tracing study carried out by the Directorate General for Competition, Consumer Affairs and Fraud Control" showed the sprouts came from fenugreek, mustard and arugula seeds supplied by British company Thompson & Morgan, a statement from Frederic Lefebvre said. "The link between symptoms and the consumption of these seeds is not definitively established to date."

Lefebvre has instructed the directorate general to ask distributors to "immediately suspend the marketing of these products," the statement said.

In a statement released to media, Thompson & Morgan noted that the French problems seems to be localized just to the one site, "which would indicate to us that something local in the Bordeaux area, or the way the product has been handled and grown, is responsible for the incident rather than our seeds." The company added that it is fully cooperating with U.K. authorities in their inquiry.

"Following further cases of E. coli in France, the Food Standards Agency is revising its guidance on the consumption of sprouted seeds such as alfalfa, mung beans (usually known as beansprouts) and fenugreek," the agency said in a statement, advising that sprouted seeds should only be eaten if cooked thoroughly, and that equipment used should be cleaned thoroughly as well.

Speaking Sunday on national television, French Health Minister Xavier Bertrand made an appeal for anyone suffering from diarrhea or severe abdominal pain to see a doctor. He also asked all those who had bought the seeds to "refrain from consuming them and take them back pending the outcome of ongoing investigations."

The health minister also revealed that a new drug had been tried at the University Hospital of Bordeaux, "a drug that was used in Germany ... and here was used earlier to enable agencies to cope more effectively."

A conference call with health officials throughout Europe was to take place Sunday, Bertrand said, to "take stock of the traceability of the bean sprouts in order to understand the origin of this bacterium."

German authorities said recently the bacteria in the outbreak there has been detected in sprouts found in a North Rhine-Westphalia household in western Germany.

At least some of the vegetables in question seem to originate from a farm in Northern Germany that has already been linked to the outbreak, ministry spokesman Stephan Melessa said June 10.

The European Center for Disease Prevention and Control said late last week that the number of deaths in the outbreak there had risen to 46, including one death in Sweden.