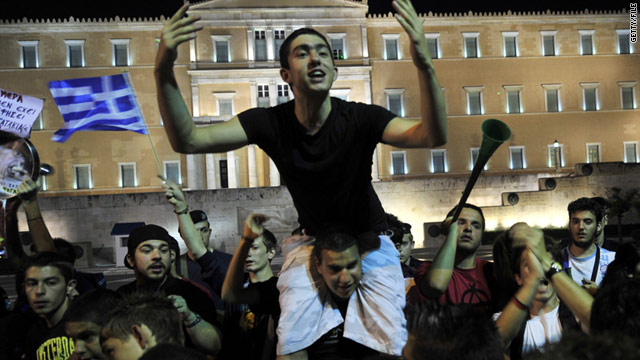 Thousands of Greek "Indignants" have been protesting outside parliament in Athens for more than 30 days.
STORY HIGHLIGHTS

(CNN) -- With fiery slogans on their lips and sturdy shoes on their feet, some 30 Spartans last week began marching to Athens to join the thousands of anti-austerity demonstrators occupying the large square opposite Greece's parliament.

Four days and more than 150 miles later, the determined group of men and women from the ancient city in southern Greece reached Syntagma Square to the cheers of the elated crowd.

Despite the burns and blisters on their feet, the Spartans added their loud voice to the chorus of public discontent that has been reverberating across Greece's capital as the country falls deeper into financial crisis.

"None of us are athletes or runners, so this was a symbolic move to say no to the sell-out of Greece," said George Pentafronimos.

Thousands of Greek "Indignants" -- protesters who take their name from their Spanish "Indignado" counterparts -- have been gathering outside Athens' Parliament House for more than 30 days, vehemently protesting against further belt-tightening measures and the loan deals signed last year between debt-ridden Greece and its foreign lenders.

Can Greece recover from debt woes?

While labor unions and teachers have hit the streets in recent weeks to protest government austerity proposals, the Indignants said they are careful to avoid links with established parties.

"We did it to show everyone that when we are united and when we help each other, even us, ordinary people, can achieve incredible things," added Pentafronimos. "At the end of the day we, the simple people have the power and not the banks or the governments."

Cash-strapped Greece is in need of funds to avoid a default on debt repayments that are due as soon as mid-July.

A 48-hour general strike kicked off on Tuesday morning and the Greek parliament is expected to vote Wednesday on a tough five-year package of tax increases and spending cuts. International creditors insist the country imposes a series of additional austerity measures in exchange for a further bailout package to keep it afloat.

Rising unemployment, new taxes, salary cuts and a potential fire sale of Greek national assets -- including ports, banks, airports and highways -- have brought together a diverse group of demonstrators and laid bare a deeper feeling of despondence that some say has been simmering in the country.

"It has been accumulating a long time now," said Eftychia Salta, a 33-year-old sound engineer who has been without a job for more than a year.

"In the last five or six years people have started to feel disgusted with the political system, especially when there is unemployment, when you have no money," she added. "All this accumulated and led to something more collective."

Syntagma Square has been serving as a meeting place for people of all ages and ideologies -- from moderates who typically refrain from street protests to the hardcore activists who have made the square their new home.

"This is something very far from the misery of the crisis, it's a kind of medicine," according to 34-year-old architect Yiannis Stathopoulos.

Web designer Aggeliki Grevia, 36, agreed: "When I go there my morale is boosted so much -- when I stay home and watch the TV analysts, it drops sharply."

Some commentators have questioned the longevity of the Syntagma camp as the movement seems to lack specific political direction.

Yet uncertainty about the future and the prospect of further economic pain is already driving the movement into its second month.

They advocate direct democracy and take turns speaking at makeshift assembly meetings. They use the internet to organize themselves and refrain from assigning leadership roles.

"We see that our political leaders are essentially marionettes, they don't represent anyone," said Grevia. "They are marionettes who obey their narcissism and the orders of those above them."

"The common slogan is 'no more,' the knife is against our neck," she added.

Protesters say new financial help that comes at the cost of further austerity measures will only aggravate the already dire situation -- having already been through a year of rigid economic measures that failed to deliver results, they fear the prospect of an even bleaker future.

"I'm not against the implementation of some measures but I believe that no one can impose such measures without offering some prospect -- that if you do this, things will get better," said Stathopoulos.

"There's going to be a big crash in the economy, I don't think they'll bring the desired results -- our experience from last year shows us that such measures don't lead anywhere."

"What we're taking, we're essentially giving it back to pay the interest," said Grevia.

"As long as we keep borrowing this becomes a vicious cycle. We'll receive the next bailout, for what? In order to become indebted again and so the big banking institutions get the money we owe them," she added.