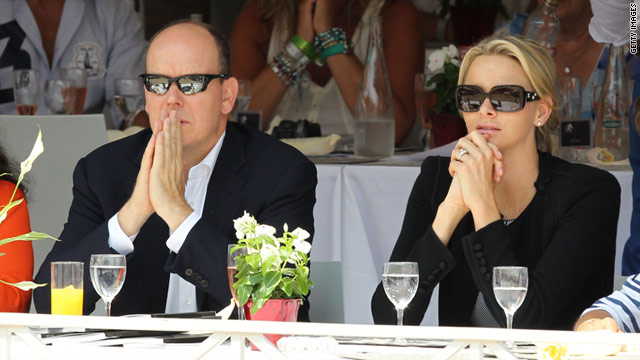 (CNN) -- Monaco's Royal Palace on Wednesday denied a published report that Prince Albert's bride-to-be, Charlene Wittstock, discovered information about the prince and tried to flee to her native South Africa but was stopped by police.

"The Royal Palace formally denies the false allegations published on the site www.lexpress.fr," the palace statement said, pointing out that the report was published "just days before the wedding ceremony between S.A.S. Prince Albert and Miss Charlene Wittstock."

"The sole intention of these rumors is to seriously damage the image of the Sovereign, as a result of damaging that of Miss Wittstock, and bear down on this happy event," the statement concluded.

"Then, they were hurt, but not for long because they know, especially the prince, that rumors are part of his life. But I think that among all of what he has heard, this one was more hurtful than others because it is damaging and the purpose of this rumor is to damage a happy event, his wedding."

The French news magazine L'Express reported Tuesday that a "shaken" Wittstock made a hasty departure to Nice Airport where she intended to board a one-way flight to South Africa, having discovered several hours before that the private life of her fiance was "not as exemplary as she imagined."

Sources were not named in the unsigned article. L'Express also reported that Wittstock, a former Olympic swimmer, was stopped by airport officials and that it took intense persuasion from Albert and his entourage to get her to stay and agree to go through with the marriage.

The 53-year-old prince and ruler of Monaco, the only son of Princess Grace and the late Prince Rainier, has never married.

In 2005, Albert publicly acknowledged having fathered a son with a flight attendant, and he has also acknowledged a daughter, now in her late teens.

The couple appeared contented Tuesday afternoon, when they were seen walking arm-in-arm along Monaco's Port Hercule, accompanied by musician Jean-Michel Jarre, who is to perform Friday evening as part of the wedding celebrations.

Monaco, a sovereign principality, is one of the smallest countries in the world, measuring just under 2 square miles. It sits on the French Riviera and is bordered on three sides by France. It has a population of about 33,000.