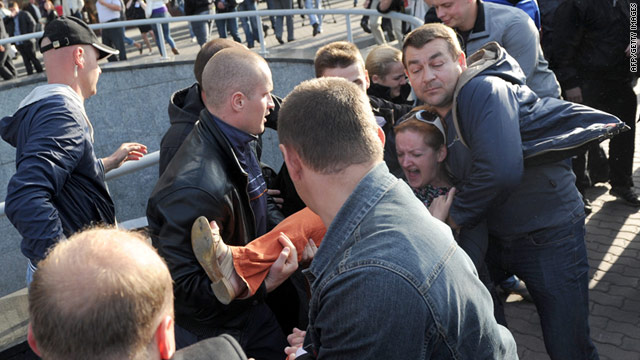 (CNN) -- Vowing to crackdown on a new wave of anti-government protests, President Alexander Lukashenko warned Sunday in Minsk there will be "no color revolution" scenarios in Belarus, the nation he has ruled with an iron fist since 1994, the official Belarusian Telegraph Company reported.

The so called "clapping protesters", as the peaceful yet defiant anti-government movement gaining momentum throughout Belarus has become known, will not be allowed to snowball into another government-toppling insurrection inspired by the Arab Spring and fueled by the Internet, Lukashenko said.

In late 2004 and early 2005, the so-called "Orange Revolution" toppled the government of Ukraine, another former Soviet republic.

"We will overcome any difficulties and endure the hardships imposed on us," Lukashenko said.

We will overcome any difficulties and endure the hardships imposed on us.
--President Alexander Lukashenko.
RELATED TOPICS

"They want to bring us to our knees... That's not going to happen," he said.

On Sunday, police used tear gas and batons against hundreds of protesters as they marched peacefully on Independence Day by clapping in unison as the president spoke, Russia's official Ria Novosti news agency reported.

In return, Lukashenko lashed out against the protesting crowd saying he will continue to meet any dissent with full-force, blaming outside influences for fomenting domestic unrest by handing support the Internet-fueled protesters who call themselves The Revolution Through Social Networks, the agency reported.

In the past weeks, protesters have been organizing themselves via the Internet through social networks such as Twitter and Facebook, despite a government forced shutdown of these sites.

According VIASNA, a Faceboook page on Human Rights in Belarus, 460 people were detained on the June 21, including several journalists, foreign nationals and even a Swedish diplomat who was later released.

The Internet-organized rallies spread over the republic and took place in Brest, Grodno, Gomel, Mogilev and other cities, Russia's Itar-Tass news agency reported.

While CNN cannot independently confirm the arrests, Russian news agencies reported that hundreds of people have been detained in the last few weeks, many sent to isolation units.

Belarus, once called "last remaining true dictatorship in the heart of Europe" by former U.S. Secretary of State Condoleezza Rice, is facing one of its worse economic crisis since it became independent from the Soviet Union in 1991.

Early this year, the United States and the European Union prolonged sanctions against Belarus as a response to the political crackdown in the wake of the presidential election of December 2010.

According to the U.S. Department of State, presidential opposition candidate Andrey Sannikau and five other candidates and activists and were convicted and given hard sentences as part of the post-electoral crackdown.

The United Nations Human Rights Council voted in June to condemn what they deemed the "persecution" of opposition leaders in Belarus.

The U.N. resolution "urges the Government of Belarus to end the politically motivated persecution and harassment of opposition leaders, representatives of civil society, human rights defenders, lawyers, independent media, students and those defending them."

Heavily dependent on Russian imports, Belarus is facing a 36% devaluation of its currency, Russia's Itar-Tass reported.