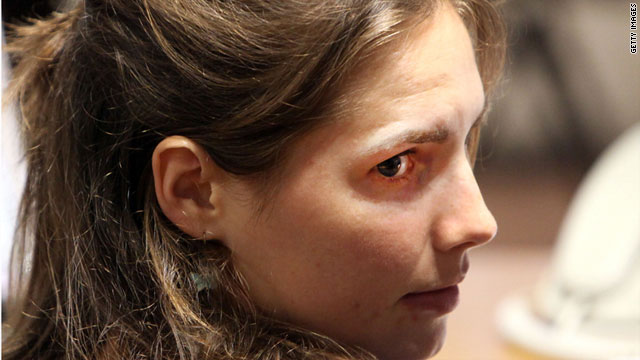 Perugia, Italy (CNN) -- The judge in the libel case of Amanda Knox's parents resigned Monday because he was involved in the trial of Knox and her ex-boyfriend Rafaelle Sollecito in the killing of a British student.

Paolo Micheli said he would recuse himself, intimating paperwork in the very brief court hearing.

Police officers are suing Knox's parents, Edda Mellas and Curt Knox, accusing them of defamation for their description of how Amanda was treated after her arrest in the murder of Meredith Kercher.

Knox won a legal victory last week when key DNA evidence from her murder trial was called into question.

In a 146-page report, forensic science professors Carla Vecchiotti and Stefano Conti concluded that while Knox's DNA was present on the knife handle, tests for Kercher's DNA were unreliable.

"There is no conclusive scientific evidence regarding the nature of the blood," the report states. "It cannot be excluded that the result obtained from sampling the find B (knife blade) could be the result of contamination" occurring at any stage of the testing process.

The forensic report gave Knox "a little bit more hope that this is all going to turn out the way it should. I mean, as an innocent person it's really hard for her," her mother said.

Knox's lawyer Luciano Ghirga said the conclusions of the report "are clear to everyone -- there is a probability of contamination" of the evidence.

Mellas and Knox were indicted in February on charges of libeling police in Perugia, the family's Italian attorney said.

In a 2009 interview in the Sunday Times of London, the couple said their daughter "had not been given an interpreter, had not received food and water, and had been physically and verbally abused" by police after her arrest for the murder of the exchange student, according to Italy's ANSA news agency.

"I think our case may go years, depending on what happens in Perugia. If we're found guilty we will appeal, even if it means going to the Supreme Court," Mellas told CNN in February when she was indicted.

Knox, 23, was sentenced in December 2009 to 26 years in prison for Kercher's death at the villa the two shared in Perugia, the central Italian town where both were students.

Kercher, 21, was found dead in November 2007, semi-naked with her throat slashed. Knox and Sollecito were found guilty of the murder.

Sollecito is serving a 25-year sentence. A third person, Rudy Guede, a drifter originally from the Ivory Coast, was tried separately and is serving a 16-year prison sentence.

He testified against Knox and Sollecito in Knox's appeal last month.