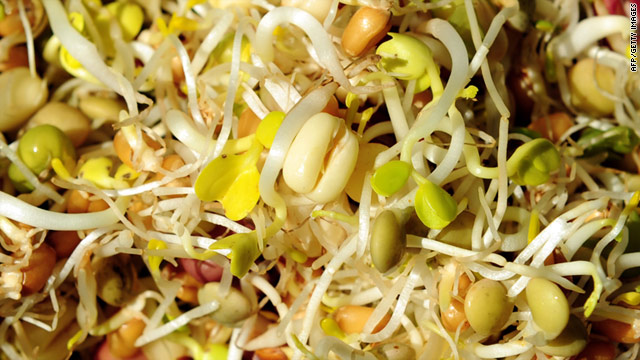 (CNN) -- The European Union has barred the import of certain seeds from Egypt after Egyptian fenugreek seeds were linked to deadly outbreaks of E. coli in France and Germany.

European officials have also ordered that all seeds imported from one particular Egyptian exporter between 2009 and 2011 be withdrawn from sale, tested and destroyed.

The move follows a European Food Safety Authority (EFSA) report released Tuesday that concludes one lot of fenugreek seeds imported from Egypt and used to produce sprouts is the "mostly likely common link" between the outbreaks of E. coli in France and Germany.

The import ban, which applies to all EU member states, extends to the end of October.

The contamination of the fenugreek seeds "probably occurred before the seeds left the importer," the European Commission cites the EFSA report as saying.

That contamination "reflects a production or distribution process which allowed contamination with fecal material of human and/or animal origin. Where exactly this took place is still an open question," the EFSA report said.

The EFSA said it was continuing to investigate where the fenugreek seeds from the Egyptian importer may have gone and concludes that the number of EU states that have received "parts of the suspected lots is much larger than previously known."

The EFSA report does not rule out the possibility that more than one lot of seeds may be implicated in the outbreaks.

"Tracing back the origins of the E. Coli 0104 contaminations in Germany and France has been a key priority for the EU from day one of the crisis," Health and Consumer Commissioner John Dalli said in a statement.

The commission would continue to monitor the situation closely and would take additional measures if needed, he said.

The recent European outbreaks from a strain of E. coli have led to 48 deaths in Germany and one in Sweden, the EFSA said, with 4,178 cases reported in European Union states, Norway and Switzerland.

The outbreak in Germany spread in May, and French authorities reported an outbreak in the Bordeaux region on June 24, the EFSA said.

The agency has offered safety advice for consumers.

"As seeds sold for sprouting are often sold as seed mixes and cross-contamination cannot be excluded, it is important that consumers are advised not to grow sprouts for their own consumption, and also not to eat sprouts or sprouted seeds unless they have been cooked thoroughly," its statement said.

In 2010, the EU imported from Egypt about 49,000 tons of the types of seeds affected by Tuesday's decision, the European Commission said, with a total value of more than 56 million euros ($81 million). Most seeds for sprouting imported by the EU come from India and China, it said.