Italian PM Berlusconi says he will not seek another term 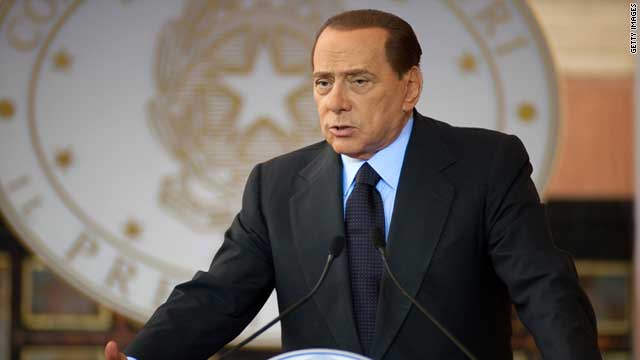 (CNN) -- Italian Prime Minister Silvio Berlusconi said Friday he will not run again when his term expires in 2013.

He made the remarks in an interview with the Italian daily newspaper, La Repubblica.

The embattled Italian premier is fighting financial corruption charges and is on trial on charges of abuse of power and prostitution with an underage teenager.

The financial corruptial case is related to alleged fraud in the sale of movie and television rights by Mediaset, Berlusconi's broadcasting company.

The case has been in and out of court for years, with a judge ordering Berlusconi in 2006 to stand trial on charges of false accounting, embezzlement, and tax fraud.

Berlusconi later passed a law shielding top government officials from prosecution while they're in office, then saw it struck down by judges.

The case is not related to the headline-grabbing allegations that he paid for sex repeatedly with an underage prostitute and later tried to pull strings to get her out of jail when she was arrested for theft.

He denies all charges.

Berlusconi has also been fighting against declining approval ratings, and his party has had major local election and referendum losses.

But in June, Italian lawmakers approved a vote of confidence for his economic reform package.

The measure -- which aims to boost growth in Italy, particularly in the southern regions -- showed that Berlusconi has a stronger majority in the lower house than his critics have estimated.