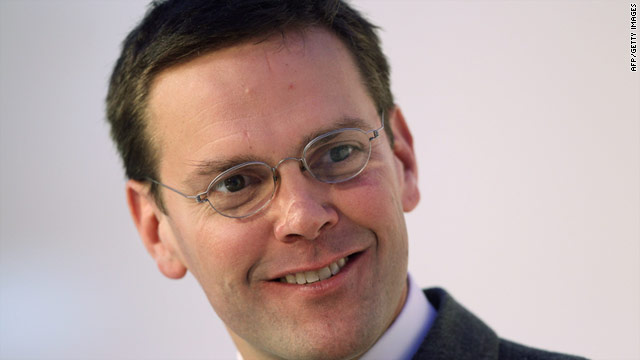 Until the phone hacking scandal, James Murdoch, 38, was widely seen as heir to his father's media empire.
STORY HIGHLIGHTS

London (CNN) -- As News Corporation faces more scrutiny into allegations of phone hacking by its journalists, the spotlight has once again fallen on senior executive James Murdoch who has been recalled to the parliamentary committee hearing.

Before the hacking scandal, James Murdoch was widely regarded by media watchers as the heir apparent to his father's powerful empire -- a remarkable turnaround for a college dropout once viewed as the family's black sheep.

As its deputy chief operating officer and head of international operations, Murdoch, 38, is the third most senior figure at News Corp, wielding considerable influence through the stable of newspaper titles at his command.

But unless he can shrug off the turmoil that threatens to engulf the company, even after it stepped away from a controversial bid to acquire full control of its UK-based broadcasting arm, his widely anticipated succession of Rupert Murdoch could be under threat.

James Murdoch's close links to the papers at the heart of the phone-hacking scandal could be pivotal. It was James Murdoch who announced the closure of the News of the World amid public fury about the paper's tactics.

He has always denied being aware of the phone-hacking activities -- although he did authorize payments to appease victims. But he is now being recalled to a UK parliamentary investigation which is trying to establish the extent of illegal phone hacking by reporters working at the company's titles.

In evidence to an earlier hearing in July, James Murdoch said he could not recall seeing a key document known as the "for Neville" e-mail. It implied that the practice was being conducted by more than one journalist, but this statement is directly contradicted by two of the company's senior employees and may be the focus of fresh questioning.

It is another intriguing chapter in a varied career to date. James Murdoch, the third child from his father's second marriage, once appeared to be the least likely of the media tycoon's offspring to succeed, despite his evident intelligence.

Born in London, but raised in New York, James Murdoch went on to attend Harvard University, where he studied film and animation before dropping out in the mid-1990s to help launch a hip-hop music label, Rawkus Records.

It wasn't long before Murdoch was brought into the family business. Rawkus was eventually bought by News Corp. and in 1996 Murdoch was persuaded to take over the company's nascent internet operations, with mixed results. By 2000 Murdoch was in charge of News Corp's Asian satellite business, Star TV, where he appeared to find his feet.

In 2003 he took over its UK-based sister operation, Sky, quickly dispelling doubts about his business acumen by meeting ambitious profit targets. Murdoch continued to rise through the ranks, taking on his News Corp executive roles in 2007.

At the time, Rupert Murdoch described his son as a "talented and proven executive with a rare blend of international perspective and deep hands-on experience."

His new position handed him overall control of News International, an umbrella company that includes the Sun newspaper, the Times and the defunct News of the World -- the paper whose activities triggered the current UK media crisis.

Although regularly cited as one of the most influential figures in Britain, Murdoch's political allegiances have never been clear. A 2007 profile in the Observer newspaper says Murdoch has been "unimpressed" by then opposition leader David Cameron. The Telegraph, meanwhile, described him as a "close confidant" of Cameron.

Murdoch himself told the Financial Times in 2007: "I don't comment on politics."

Murdoch, who has two children with wife Kathryn Hufschmid, is said to be a black belt in karate. He is also proficient at corporate combat. In 2006 he steered BSkyB into the acquisition of a 17.9% stake in UK broadcaster ITN, blocking a rival move by Virgin Media.

But it is his and News Corp's plans to acquire full ownership of BSkyB that have put them on a collision course with British lawmakers in the wake of the phone hacking scandal, eventually deciding to back down under government pressure.

Media observers say it is too early to predict whether Murdoch can survive the scandal with his News Corp. prospects intact or will be edged out by contenders including older brother Lachlan or second-in-command Chase Carey.

"Obviously there is interest in the company's main markets, Australia, the U.S. and UK and there will be repercussions affecting any officer of the company deemed to have oversight," said London-based analyst Claire Enders.