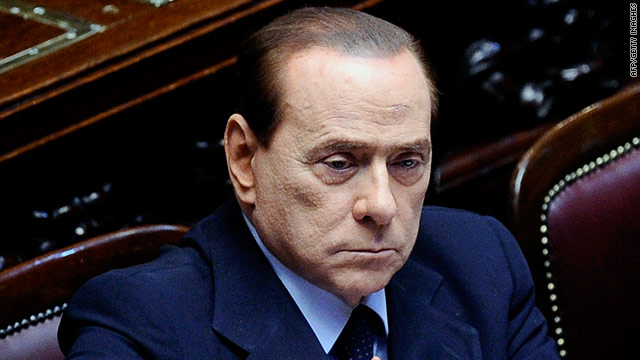 The next hearing for Italian Prime Minister Silvio Berlusconi's trial on charges of sex with a minor is October 3.
STORY HIGHLIGHTS
RELATED TOPICS

Milan, Italy (CNN) -- The judge in Italian Prime Minister Silvio Berlusconi's trial on charges of sex with a minor rejected all defense motions Monday and scheduled the next hearing for October 3.

Judge Giulia Turri dismissed defense motions one by one in a hearing attended by neither Berlusconi nor the woman at the center of the accusations, dancer Karima el Mahroug -- nicknamed "Ruby the Heart-stealer."

Berlusconi's attorney, Niccolo Ghedini, slammed Turri. "It is shameful. It is a ruling without any logic," he complained to reporters after the proceedings. "It is not possible to hold a fair trial here. The judge rejected all of 16 objections. How is this possible?"

It was the first time he has had hearings in both cases on the same day.

He's drawn the most international attention for the headline-grabbing allegations that he paid for sex with the dancer, and then tried to pull strings to get her out of jail when she was arrested for theft.

It's illegal to pay for sex with a minor in Italy. Both the prime minister and the dancer admit he gave her money, but deny it was for sex.

Mills denied receiving bribes and his conviction in the case was overturned last year. Mills is the ex-husband of former British government minister Tessa Jowell.

The Mills case has been in and out of court for years.

Berlusconi at one point passed a law shielding top government officials from prosecution while they're in office, and then saw it struck down by judges.

The court adjourned the Mills case until September 19.

Berlusconi did not appear at the Ruby trial on Monday. Ghedini said the prime minister "had other institutional commitments."

Berlusconi's political fortunes have been mixed in the face of the trials.

His ruling coalition suffered a major defeat in local elections in Milan and Naples at the end of May, with voters backing left-wing candidates in both cities.

Milan's turn to the left is a powerful setback for Berlusconi. Milan is his hometown and his political stronghold, and it has been led by a center-right mayor for the past two decades

But less than a month later, Italian lawmakers approved a vote of confidence for his economic reform package.

Lawmakers in the lower house of parliament approved the package in a 317-293 vote on June 21.

The measure -- which aims to boost growth in Italy, particularly in the southern regions -- wasn't a vote of confidence on the Berlusconi government but only on the reform package itself.

But the vote showed that Berlusconi has a stronger majority in the lower house than his critics thought.

CNN's Hada Messia and Diana Magnay contributed to this report.