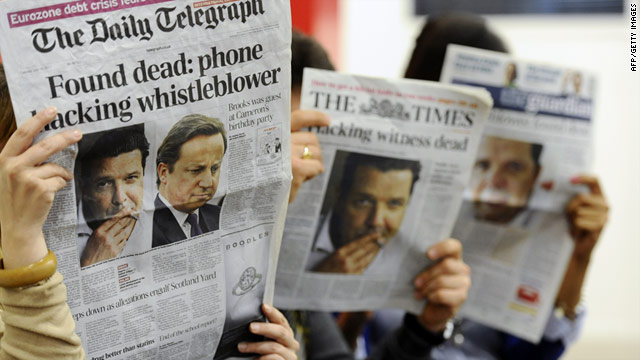 London (CNN) -- Investigators have found no sign of foul play in the death of a man identified as the whistleblower behind the scandal surrounding media mogul Rupert Murdoch's News International, British police announced Tuesday.

Sean Hoare was one of the first journalists to go on the record and allege phone hacking at Murdoch's now-defunct News of the World. He was found dead Monday at his home in Watford, northwest of London, the British Press Association said.

An autopsy conducted Tuesday afternoon "has concluded there is no evidence of third-party involvement and the death is non-suspicious," Hertfordshire police said in a statement. Earlier, police had called his death "unexplained, but not thought to be suspicious."

Hoare had publicly accused News of the World of phone-hacking and using "pinging" -- a method of tracking someone's cell phone using technology that only police and security officials could access -- according to the New York Times. He was one of the few sources who allowed his name to be used when speaking to the Times last year for an investigative report about allegations of phone-hacking by the British tabloid, which was shuttered last weekend as the scandal grew.

The rapidly metastasizing scandal has led to the resignations of several of Murdoch's top lieutenants and of the two top officials of London's Metropolitan Police, whose officers were accused of taking payments from journalists in exchange for confidential information.

The scandal has led to 10 arrests, including those of two former News of the World editors, Andy Coulson and Rebekah Brooks. Brooks' arrest came two days after her resignation as head of News International, the British subsidiary of Murdoch's global conglomerate News Corp., while Coulson had gone on to become Prime Minister David Cameron's communications director.

The Times described Hoare has a "onetime close friend of Coulson's." The report added that Hoare said he was "fired during a period when he was struggling with drugs and alcohol. He said he was now revealing his own use of the dark arts -- which included breaking into the messages of celebrities like David and Victoria Beckham -- because it was unfair for the paper to pin the blame solely on" one reporter who covered the royal family.

Hoare "repeatedly expressed the hope that the hacking scandal would lead to journalism in general being cleaned up and said he had decided to blow the whistle on the activities of some of his former News of the World colleagues with that aim in mind," Britain's The Guardian newspaper reported Monday.

His allegations ultimately led to Tuesday's testimony by Murdoch to a House of Commons committee, where he denied ultimate responsibility for illegal phone hacking carried out by his employees.

"I feel that the people I trusted, I don't know at what level, let me down and I think they behaved disgracefully, betrayed the company and me, and it's for them to pay," he said. "I think that frankly I'm the best person to clear this up."