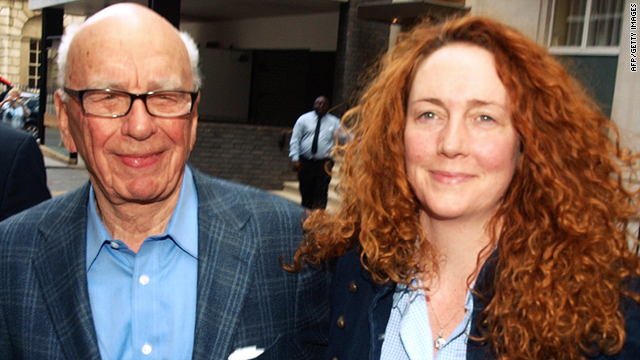 London (CNN) -- Accusations that journalists at Rupert Murdoch's British newspapers hacked into the phones of politicians, celebrities and unwitting people caught up in the news -- including child murder victims -- have severely bruised his media empire.

It has forced the closure of Britain's biggest-selling paper, a withdrawal for his bid for the broadcaster BSkyB and the resignation of his trusted UK chief executive Rebekah Brooks.

The following is a timeline of the scandal:

News of the World prints a story about Prince William injuring his knee, prompting royal officials to complain to police about probable voice mail hacking.

News of the World royal editor Clive Goodman and private investigator Glenn Mulcaire are convicted of conspiracy to hack into phone voice mails of royals and are jailed. Andy Coulson, the paper's editor, claims to be unaware of hacking but still resigns.

Also in July, Andy Coulson is hired as director of communications for Conservative party leader David Cameron, who becomes prime minister in May 2010.

Britain's Press Complaints Commission releases a report concluding that there is no evidence of continued phone hacking.

A celebrity public relations agent agrees to drop his lawsuit against News of the World for a payment of more than £1 million ($1.6 million).

Former News of the World journalist Sean Hoare alleges that phone hacking was a common practice at the paper and encouraged by Coulson.

Coulson resigns as Cameron's spokesman because of coverage of the phone-hacking scandal.

News of the World officially apologizes for hacking into voice mails from 2004 to 2006 and sets up a compensation system for unnamed victims.

Senior News of the World journalist James Weatherup is arrested on suspicion of conspiracy to intercept communications.

It is revealed that News of the World journalists possibly hacked into then-missing teenager Milly Dowler's voice mail and deleted messages to free space, causing her parents to believe she was still alive.

Rupert Murdoch, CEO of News Corp., the parent company of News of the World owner News International, promises full cooperation with the investigation and calls the accusations against News of the World "deplorable and unacceptable."

News International announces that the July 10 edition of News of the World will be the paper's last.

Coulson is arrested. Goodman, the paper's former royal correspondent who served a four-month jail term in 2007, is also arrested on corruption allegations.

The 168-year-old News of the World publishes its final edition with the headline "Thank you and goodbye."

Rupert Murdoch flies into London to take personal charge of the crisis.

British lawmakers ask Rupert and James Murdoch and Brooks to testify before them.

-- The FBI launches an investigation into allegations that News Corp. employees or associates hacked into the phones of 9/11 victims, a federal source says.

-- Rupert and James Murdoch agree to give evidence to a committee of British lawmakers.

-- A 60-year-old man, widely reported to be Neil Wallis, a former executive editor of the News of the World, is arrested.

-- Les Hinton resigns as head of Dow Jones and publisher of The Wall Street Journal; he was Brooks' predecessor at News International.

-- Rupert Murdoch visits the family of murdered teenager Milly Dowler, whose voice mail had been hacked.

-- Rebekah Brooks is arrested, questioned for about nine hours, and released on bail until October, police and her spokesman say.

-- Metropolitan Police Commissioner Paul Stephenson -- who leads London's police and is the UK's highest ranking policeman -- resigns. It comes after revelations that former News of the World executive editor Neil Wallis later became a communications consultant for the police.

Stephenson says he decided to resign because increased scrutiny connected to the case would burden his department and detract from its accomplishments.

-- Former reporter Sean Hoare is found dead. Police say the death is being treated as "unexplained" but not "suspicious."

-- Assistant police Commissioner John Yates, who ruled two years ago that there was no reason to pursue an investigation into phone hacking by journalists, also resigns. He was due to be suspended when he quit, police said.

-- The hacker collective, LulzSec, claims credit for hacking the website of the News Corp. paper, The Sun. It redirects those on the paper's website to a false story claiming Murdoch had been found dead in his garden.

-- Murdoch, his son James and Brooks are set to appear in parliament on Tuesday to answer questions about the phone scandal.

-- Murdoch, his son James and Brooks are set to appear in parliament on Tuesday to answer questions about the phone scandal.