Probe of journalists' misdeeds appears to expand beyond Murdoch papers 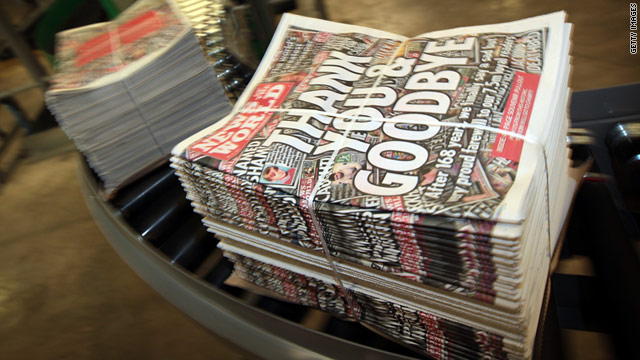 The last edition of the News of The World which closed amid phone hacking and bribery allegations.
STORY HIGHLIGHTS

London (CNN) -- A British police investigation into illegal activity by journalists appears to have expanded beyond Rupert Murdoch's disgraced and now defunct News of the World tabloid.

The Metropolitan Police have asked the British Information Commissioner's Office for its files from a probe into the work of a private investigator who sold illegally obtained information to a number of newspapers, the data-protection office told CNN Thursday.

The papers named in the Information Commissioner's 2006 report include the Daily Mail, Daily Mirror and News of the World.

The report, which covers the actions of a private investigator up to 2003, does not deal with phone hacking, but with "blagging," the term British journalists use for illegal impersonation to get private information.

A police spokesman declined to say what lines of inquiry the Met was pursuing as it pursues allegations of illegal eavesdropping and police bribery by journalists.

The scandal over phone-hacking by News of the World led the paper to cease publication on July 10. It also prompted two top police officers to resign and has put pressure on Prime Minister David Cameron, who hired a former editor of the paper to be his spokesman.

Police added 15 more officers to the investigation, boosting the existing team to 60, the officer in charge of the case said Wednesday.

The increase comes in response to "a surge of enquiries and requests for assistance from the public and solicitors," Deputy Assistant Commissioner Sue Akers said.

Police had already been plowing through 11,000 pages of documents seized from a private investigator before they requested the additional files from the Information Commissioner.

The request for files came three months ago, the commissioner's office said Thursday.

The Information Commissioner's 2006 report, "What Price Privacy Now?" names 31 newspapers and magazines that were clients of a private investigator who illegally obtained private information about people, usually by calling and pretending to be someone he was not.

The Daily Mail and Mail on Sunday newspapers, and the Daily Mirror and associated Sunday People hold the top four spots in terms of number of "transactions each publication was positively identified as being involved in and how many of their journalists (or clients acting on their behalf) were using these services," the report says. News of the World ranks fifth.

The publisher of the Daily Mail and Mail on Sunday told CNN Thursday it had banned its reporters from using private investigators and strengthened systems to prevent its employees from breaking privacy laws.

"Following that report, Associated Newspapers banned the use of such agents and took steps to ensure that its journalists were aware of, and complied with, their obligations under the Data Protections Act 1998," the company said in an e-mail statement.

The Mirror group did not immediately respond to CNN requests for comment.

Piers Morgan, who now presents a CNN interview program, was editor of the Daily Mirror during part of the period covered by the report. He left the newspaper in 2004.

"In my time at the Mirror and the News of the World, I have never hacked a phone, told anybody to hack a phone or published any story based on the hacking of a phone," Morgan said Tuesday on CNN.

News of the World's closure after 168 years of publication came in the face of public outrage over the accusation that people working for it had hacked the phone of Milly Dowler, a missing 13-year-old who was later found dead.

The prime minister is caught up in the scandal because he hired a former News of the World editor to be his spokesman after the journalist, Andy Coulson, resigned over a separate phone-hacking case. Coulson has denied wrongdoing but quit when a journalist working for him pleaded guilty to hacking.

Cameron said Wednesday that, in hindsight, he now knows he should not have hired Coulson. Coulson, who resigned his government post in January, was arrested this month. He has not been charged and is free on bail.

It also forced media baron Rupert Murdoch, who owned the paper, to testify before Parliament this week alongside his son James, a top News Corp. executive.

They denied knowing about illegal activities by their employees and vowed to clean house.

Cameron has announced an inquiry into press practices, led by a judge and assisted by civil rights campaigners and former top journalists and police officers.