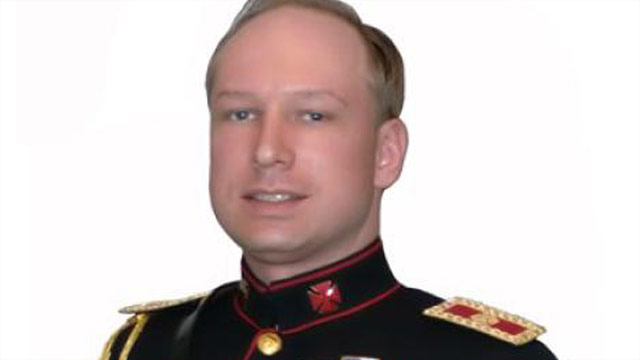 Oslo, Norway (CNN) -- A rambling, 1,500-page manifesto purportedly written by the suspect in Friday's deadly terror attacks in Norway lays out right-wing extremist views and vows that a "European civil war" will lead to the execution of "cultural Marxists" and the banishing of Muslims.

"If you are concerned about the future of Western Europe you will definitely find the information both interesting and highly relevant," the author writes, adding later that his "European Declaration of Independence" took him nine years to complete.

While the title page of the document says "By Andrew Berwick," the writer later identifies himself as Anders Behring Breivik, the suspect in the Norwegian terrorist attacks.

CNN could not independently verify that Breivik wrote the document or posted the 12-minute video, and Norwegian authorities would not confirm that the man in their custody wrote the manifesto, saying it was part of their investigation.

Police told the Norwegian newspaper VG that the document is "linked" to Friday's attacks.

Shooter not 'on the police radar'

Text in the video rails against the "Islamization" of Europe and "cultural Marxists" and asserts that the majority of Europe's population will be Muslim by 2050 "unless we manage to defeat the ruling Multiculturalist Alliance."

"Celebrate us, the martyrs of the conservative revolution, for we will soon dine in the Kingdom of Heaven," the video says.

Parts of the document use the same wording as the 35,000-word anti-technology manifesto written by "Unabomber" Ted Kaczynski and published in the Washington Post in 1995.

The document contains some of the same anti-Muslim rhetoric that has become a part of mainstream debate in Norway, according to Anders Ravik Jupskaas, a Ph.D. researcher at the University of Oslo who studies right-wing political movements in Scandinavia.

"What you see here is this new European phenomenon of this anti-Islamic rhetoric, where it's not only the immigrants (who are enemies). In fact, the main enemy is the political elite," he said. "They argue that this political elite has betrayed their own country. They have imposed multiculturalism."

But the writer takes such philosophies to another level, he said.

"It's part of the same stream of ideas, but it's still very different in terms of extremeness," Jupskaas said.

The old saying 'if you want something done, then do it yourself' is as relevant now as it was then.
--Excerpt from manifesto
RELATED TOPICS

Norwegian authorities have said they are still trying to determine the motive behind the terror attacks.

In the manifesto, the author vilifies Prime Minister Jens Stoltenberg and his Labour Party, which has majority control in Norway's government, accusing the party of perpetuating "cultural Marxist/multiculturalist ideals" and indoctrinating youth with those ideals. The author accuses the Labour Party of embracing those ideals and therefore allowing the "Islamification of Europe."

The manifesto speculates about would happen if the author were to survive "a successful mission and live to stand a multiculturalist trial."

"Not only will all my friends and family detest me and call me a monster; the united global multiculturalist media will have their hands full figuring out multiple ways to character assassinate, vilify and demonize," it says.

The manifesto and videoinclude photos that appear to match those of the suspect, some of which had been posted on his Facebook page and several never-before-seen images of the same man. The author leaves clues about his family and background, and also indicates that English is his "secondary language."

The document and video are titled "2083: A European Declaration of Independence," a date that the author later explains is the year he believes an European civil war will end with the execution of cultural Marxists and the deportation of Muslims.

This "civil war" would come in three phases, he predicts. The first runs through 2030 and includes "open source warfare, military shock attacks by clandestine cell systems (and) further consolidation of conservative forces."

Between 2030 and 2070, he calls for "more advanced forms of resistance groups (and the) preparation of pan-European coup d'etats."

The final stage features the deposition of Europe's leaders and "implementation of a cultural conservative political agenda."

The author does not specifically explain why he chose the date 2083, though it is the 200th anniversary of the death of Karl Marx.

The manifesto and video also containphotos of Breivik in what appear to be uniforms, including one in which he is wearing a U.S. Marine dress jacket decorated with an Iron Cross, Knights Templar and Free Mason medals.

Another picture shows Breivik dressed in a wet suit with a patch that reads "Marxist Hunter" and holding a high-powered rifle.

The author states that he was moved to action dating to "my government's involvement" in NATO's 1999 strikes during the Kosovo campaign, claiming this wrongly targeted "our Serbian brothers (who) wanted to drive Islam out by deporting the Albanian Muslims back to Albania."

He also criticizes "my government's cowardly handling of the Muhammad cartoon issue" -- a reference to the Norwegian government's apology for the nation's private newspapers having repeatedly published the controversial cartoon. Another reference blasts Norway, home of the Nobel awards, for awarding a peace prize to late Palestinian leader Yasser Arafat.

The author details his bomb-making experiments, including a theory that one should purchase a farm so that purchase of large amounts of fertilizer -- which can be used to make bombs -- is less likely to be noticed.

"Be extra careful when researching for bomb schematics (fertilizer bombs), as many terms will trigger electronic alerts," he writes, one of several tips that include using an "anonymous laptop and browse free to your local McDonalds" in order to "avoid ending up on any watch list."

Besides hands-on instructions, the document also functions as a running diary. It also includes references to his relatives' sexual indiscretions, entries on some of his friends' personal lives, and his own off-and-on steroid use.

From July 2 on, though, the author becomes more business-like and complains that going off his testosterone supplements had ramped up his "aggressiveness." He then digs up his guns and prepares the bombs. It all leads up to July 22, the date of the Norway terror attacks.

"The old saying 'if you want something done, then do it yourself' is as relevant now as it was then," he writes. "In many cases; you could do it all yourself, it will just take a little more time. AND, without taking unacceptable risks. The conclusion is undeniable.

Less than three hours later, a bomb went off in downtown Oslo.