From Nick Pisa, For CNN 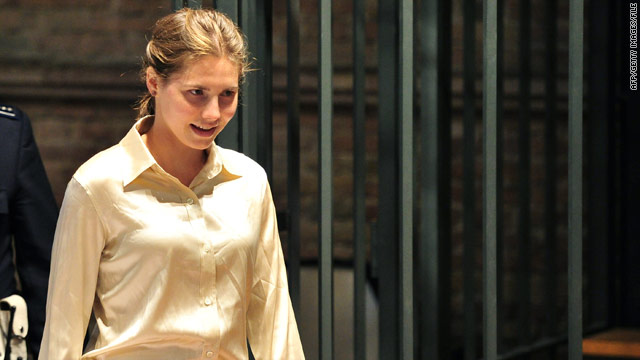 Amanda Knox, 24, was convicted and sentenced to 26 years in prison for the murder of a student in Italy.
STORY HIGHLIGHTS

Perugia, Italy (CNN) -- Police forensic scientists involved in the Amanda Knox murder case made a series of glaring errors during their investigation, according to court-appointed experts who testified Monday in her appeal.

Knox, 24, was convicted and sentenced to 26 years in prison for the murder of British student Meredith Kercher, 21, who was found partially naked with her throat cut in her bedroom of the house the two shared.

Knox and her former boyfriend Raffaele Sollecito, 26, were convicted on two key pieces of evidence: a 30-centimeter (12-inch) kitchen knife and a clasp from Kercher's bloodied bra. Authorities testified in the original trial that Kercher's DNA was found on the blade of the knife, Knox's DNA was on its handle, and DNA from Sollecito was on the bra clasp.

But in their appeal in Perugia, two independent, court-appointed experts -- professors Carla Vecchiotti and Stefano Conti -- were damning in their appraisal of the methods used by police forensic teams.

Conti showed a brief clip of two officers collecting the bra clasp, pointing out how it had been found six weeks after the murder and in a different place.

There were gasps from the public gallery as the two officers were seen picking up the clasp, passing it from hand to hand, dropping it, picking it up and then placing it on the floor again.

Conti said that although gloves were worn, grubby dirt marks could clearly be seen on the thumb and forefinger of one of the officers. "We can see from these circumstances proper protocol was not followed," he said.

He also highlighted how the clasp had been placed into a plastic bag instead of a paper bag, saying the risk of contamination was "significant" as a result of how it had been collected.

The experts said the clasp had been kept in such a poor way that it was covered in rust, and further testing was futile. They both stressed that they had worn masks, gloves, paper suits and used sterile knives and scissors during their retesting at Rome's La Sapinenza University.

With regard to the knife, Vecchiotti said their test results were negative for blood and that the amount of DNA said to have been Kercher's was so low, it could not be examined again with any conclusion.

The two said that, studying the original report, it was clear that "numerous people had been in and out of the crime scene" and that "objects had been moved," which again put all evidence at risk of contamination.

In a point-by-point deconstruction, the experts said that because of the errors made by police during the original investigation, the evidence against Knox and Sollecito should be considered "inadmissible."

Knox and Sollecito listened intently as the experts put forward their case, bringing fresh hope to them that they will be freed when the court gives its verdict in September.

During a break in proceedings, Knox's mother, Edda Mellas, said: "To us this is not earth-shattering, because we have been saying it all along since the original trial, but it was just ignored.

"It really does beggar the question how they were found guilty in the first place when you see the mistakes that were made during the original investigation," she said.

The hearing is scheduled to resume on Saturday.

Kercher, a University of Leeds student from Coulsdon, Surrey, was discovered with her throat slit in November 2007, in the hilltop town of Perugia, just two months after she arrived in Italy during her year abroad.

A third defendant, small-time drug dealer Rudy Guede, an immigrant from the Ivory Coast, was also jailed in connection with the brutal killing. He received a 30-year sentence for murder and sexual violence following a fast-track trial in October 2008. His sentence was later cut to 16 years. Knox and Sollecito -- who is serving 25 years -- were found guilty in December 2009.