Suspect admired bloggers who believe Europe is drowning in Muslims 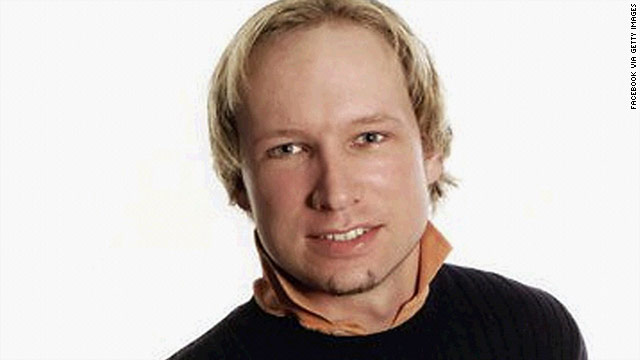 (CNN) -- Anders Behring Breivik was a prolific blogger and visitor to online sites that reaffirmed his worldview.

Breivik's taste in online conversation shows a compulsive interest in websites that see the modern world in terms of a "clash of civilizations," where Christian values are supposedly under siege in the face of an Islamic onslaught.

But rarely if ever does he seem to have advocated a violent response to what he saw as the Islamization of Europe, even as he planned a massacre for years.

The head of Norway's intelligence police, Janne Kristiansen, told a Norwegian newspaper Monday that Breivik had "deliberately desisted from violent exhortations on the net. He has more or less been a moderate, and has neither been part of any extremist network."

The blogs and websites Breivik enthused about were pro-American and pro-Israel, extremely hostile to Islam and despairing that the European political elite would ever see the error of its liberal multicultural outlook.

One such site is Gates of Vienna, whose banner reads: "At the siege of Vienna in 1683 Islam seemed poised to overrun Christian Europe. We are in a new phase of a very old war."

Father: Breivik should have killed self

Friends of Norway suspect speak out

Breivik regularly applauded a writer who goes by the name of Fjordman on the site, one of whose contributions, from 2007, reads: "When the Swedish welfare state collapses, the immigrants who lose their payments will have to go somewhere. Denmark will probably be fairly successful at keeping them out. A lot of them will migrate to Norway, some will move to Germany and the Netherlands, and some will probably end up in Eastern Europe."

The book contends that Europe is being overrun by Muslims -- and that its governing class is complicit in this surrender. "According to some, one out of three babies born in France is a Muslim," Fjordman writes.

"Hundreds of Muslim ghettos already de facto follow sharia, not French law. Some believe France will quietly become a Muslim country, while others predict a civil war in the near future."

Fjordman has never advocated violence and has condemned Breivik's actions, posting on Gates of Vienna: "Any person doing such a thing is a monster. He murdered dozens of people in cold blood and injured countless others, mentally or physically."

Efforts by CNN to identify Fjordman have been unsuccessful.

Breivik was a prolific contributor to a Norwegian site, Document.no, in 2009 and 2010, purportedly posting such comments as: "Can you name ONE country where multiculturalism is successful where Islam is involved?" and "Today's Protestant church is a joke. Priests in jeans who march for Palestine and churches that look like minimalist shopping centers."

Other websites and blogs he followed include Jihad Watch, Brussels Journal, TheReligionofPeace and Atlas Shrugs. ReligionofPeace describes Islam as a "rigid political and cultural system with a mandate to conquer and govern the lives of others via necessary force."

Breivik points to a piece written by Pamela Geller in Atlas Shrugs in July 2009. "The Muslims have taken to rampaging, destroying and setting alight the streets of France. The media has abetted the fifth column with cowardly silence," she writes.

Geller has been prominent in opposition to the building of a mosque near Ground Zero in New York.

She notes there is just one reference to her in Breivik's purported 1,500-page manifesto, and ridicules the notion that she could have influenced his behavior.

Geller also complains, in a posting Tuesday, about "More expected grotesque exploitation and opportunism from Muslim Brotherhood groups in America" of the Oslo attack.

But to her long-time adversary Jeffrey Goldberg at the Atlantic magazine, Geller and others of like mind clearly influenced Breivik: "Free speech means free speech. But she should be aware now that violent people look to her for guidance, and she should write with that in mind."

On his blog Sultan Knish, Daniel Greenfield says that "trying to apply rational standards to Breivik is futile. Like many killers he was of above average intelligence, but below average sanity. Remove the politics, and Breivik fits the profile of most spree killers. He was angry at society, a loner ..."

Another conservative blogger, Mark Steyn, agrees. In a blog entitled "Islamophobia and Mass Murder" for the National Review Online, he argues that attaching the far-right tag to Breivik is pointless.

"This man Breivik may think he's making history and bestriding the geopolitical currents and the clash of civilizations, but in the end he went and shot up his neighbors. Why let his self-aggrandizing bury the reality?" Steyn wrote Monday.

But Greenfield insists Breivik's attacks did have a cause: "The Oslo killings are another item on the ledger of the high cost of Islam. The explosive rage on both sides fueled by a social instability created by aggressive immigration with no thought to its impact on the country as a whole. It was Breivik who spent nine years planning and carrying out the attacks, but it was the political authorities who had created a scenario that made it possible."

One of Breivik's entries on Document.no compliments the far-right English Defence League. "The tactics of the EDL is now out to 'entice' an overreaction from Jihad Youth / Extreme-Marxists -something they have succeeded several times already," he writes.

The EDL has also condemned Breivik -- saying that "Anyone who expresses any extremist beliefs of any kind, be it white supremacist, Christian fundamentalist or Islamic extremists, they all get banned from the (Facebook) site." But its leader Tommy Robinson echoed Greenfield and Geller in a BBC interview, saying: "There are British people that are greatly concerned about the threat Islam that is having on our nation ... There needs to be a platform given to people so they can have their frustrations heard."

Mark Steyn fears the platform for debate will actually shrink as a result of Breivik's rampage. "Free societies can survive the occasional Breivik," he wrote in a post Monday for the National Review Online. "If Norway responds to this as the Left appears to wish, by shriveling even further the bounds of public discourse, freedom will have a tougher time."