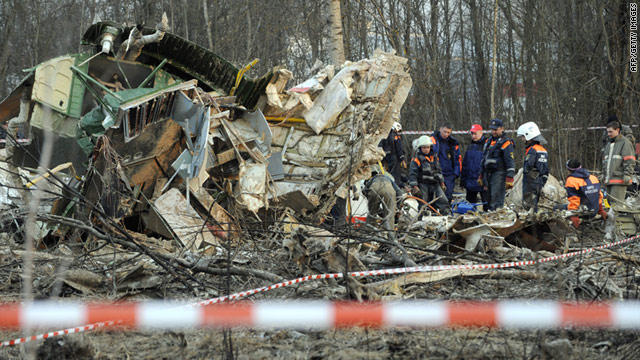 Unclear instructions from Russian air traffic controllers and bad weather at Smolensk airport also played a part, according to the report released Friday in Warsaw.

Polish President Lech Kaczynski, his wife and many top Polish officials died in the April 2010 crash as they headed to a memorial service to mark the 70th anniversary of a World War II massacre.

"The flight crew of the airplane in question was not sufficiently prepared for the task at hand given the complexity of the situation the crew encountered during their last flight," the 328-page report said.

"The aircraft commander, co-pilot, and navigator had been trained hastily, haphazardly and in violation of the respective training regulations."

The landing zone controller gave incorrect information to the crew members as they made their descent and "issued the command to stop the descent and to level out too late," the report said.

The Russian controllers "kept informing the Tu-154M crew about the correct position during approach contrary to the actual position of the airplane" during its descent, which led the crew to believe they were approaching correctly when they were not.

The situation was compounded by "the crew's insufficient knowledge of the airplane's systems and their limitations," the report says, and "inadequate cross-monitoring among the crew members and failure to respond to the mistakes committed."

In addition, visibility for air traffic control and air crew was impeded in bad weather by poor lighting at the airfield and trees on the approach to the runway that were too tall, the report says.

In January, a Russian-led investigation concluded that the Polish crew was at fault in the crash.

The crew should have decided to divert to another airport in light of "repeated and timely" warnings about bad weather in Smolensk, Russia, the Interstate Aviation Committee said.

The presence of a Polish air force commander in the cockpit may also have contributed to the crash, the aviation committee said, noting that he had alcohol in his blood at the time of the crash.

The Russian-made Tupolev Tu-154 plane crashed on April 10, 2010, in Russia's Smolensk region west of Moscow, killing everyone aboard.

They were headed to the village of Katyn to commemorate the 1940 massacre, in which some 22,000 Poles were executed by the Soviet secret police.