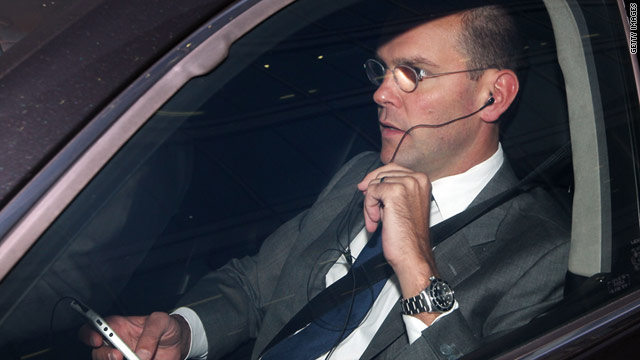 A motion to have James Murdoch return to testify in person was voted down by the parliamentary committee.
STORY HIGHLIGHTS
RELATED TOPICS

London (CNN) -- James Murdoch and Rebekah Brooks, who had testified before a British parliamentary committee regarding the UK phone hacking scandal, have been asked to clarify some of their testimony, a lawmaker said Friday.

John Whittingdale said that the parliamentary committee has written letters to Murdoch, Brooks, and others to request "more information" about their testimony. He made the statement at a news conference on another topic.

The request stems from claims by a former editor of the News of the World and the paper's former head of legal affairs, Colin Myler and Tom Crone, that Murdoch had been "mistaken" in his testimony regarding an important piece of evidence.

Myler and Crone also were sent letters from the committee, Whittingdale said. A former News International director of legal affairs who also alleged mistakes, Jon Chapman, was also to receive a letter.

A motion to have Murdoch and the others return to testify in person was voted down by the committee, Whittingdale said.

The Culture, Media and Sport Select Committee also released correspondence that included a letter from lawmaker Louise Mensch in which she apologized for incorrectly alleging that Piers Morgan, a former tabloid editor who now hosts a CNN show, had been involved in phone hacking.

"I wrongly stated that Piers Morgan, formerly editor of the Daily Mirror, had been open about personally hacking phones in a book he wrote. This was based on my misreading of an article in the Daily Telegraph," she said.

The claims by Myler and Crone relate to what Murdoch told the committee about a settlement with Gordon Taylor, chief executive of the Professional Footballers Association.

Crone and Myler said they had told Murdoch of an e-mail regarded as central to the question of whether more than one reporter at the paper was involved in illegal activity.

But Murdoch, the son of media mogul Rupert Murdoch, offered contradictory information to the committee, as he, his father and Brooks were quizzed over the scandal.

The e-mail referred to by Crone and Myler is known as the "for Neville" e-mail, so named for its apparent connection to the News of the World's former chief reporter, Neville Thurlbeck.

It is thought to have played a key role in the decision by executives at News International, which owned News of the World, to pay some £700,000 ($1.1 million) to Taylor in an out-of-court settlement after he threatened legal action, the Guardian reported.

James Murdoch has said he stands by his testimony.

A statement issued Friday on behalf of private eye Glenn Mulcaire, one of the central figures in the News of the World hacking scandal, repeated his apology to those hurt by his actions -- and suggested he did not bear sole responsibility.

"As an employee he acted on the instructions of others. There were also occasions when he understood his instructions were from those who genuinely wished to assist in solving crimes," the statement said.

"Any suggestion that he acted in such matters unilaterally is untrue. In the light of the ongoing police investigation, he cannot say any more."

Mulcaire, who was employed by News of the World from 2002 as a private investigator, was jailed in 2007 after being convicted of intercepting royal voice mail.

When police arrested Mulcaire in 2006, they seized 11,000 pages of documents with the names of 3,870 potential victims of illegal eavesdropping. The police in London have begun contacting those people identified.