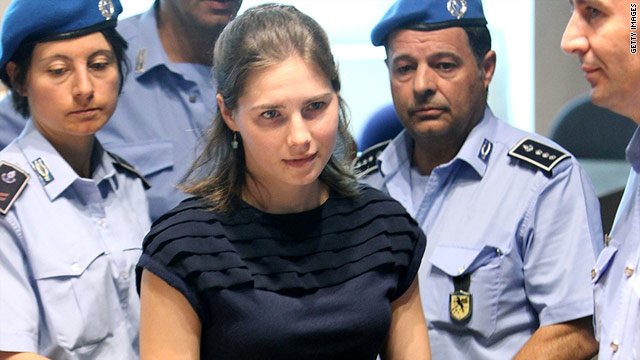 Knox was convicted of killing her British roommate, Meredith Kercher, in the Italian city of Perugia.

Forensic expert Patrizia Stefanoni and her team examined DNA evidence during the original investigation in 2007.

Is Amanda Knox closer to freedom?

Earlier this week, the professors argued that two key pieces of evidence in the conviction of Knox and then-boyfriend Raffaele Sollecito should have been considered "inadmissible."

Supporters of Knox, who arrived in court Saturday in a pink sweater, hope that her conviction may be overturned or her sentence reduced on appeal.

Knox, 24, was sentenced to 26 years in prison for the murder of Kercher, 21, who was found partially naked with her throat cut in her bedroom of the house the two shared in 2007.

Sollecito and Knox were convicted on two key pieces of evidence: a 30-centimeter (12-inch) kitchen knife and a clasp from Kercher's bloodied bra.

Authorities testified in the original trial that Kercher's DNA was found on the blade of the knife, Knox's DNA was on its handle and DNA from Sollecito was on the bra clasp.

But giving evidence before the appeal court Monday, Vecchiotti said their test results for the knife were negative for blood and that the amount of DNA said to have been Kercher's was so low, it could not be examined again with any conclusion.

Prosecutor Manuela Comodi questioned Vecchiotti on Saturday as to what is considered to be a standard sufficient quantity of DNA for a test to be carried out and be judged valid, suggesting experts differ on the amount.

Vecchiotti and Conti stressed again that they had not been able to identify DNA from Kercher on the blade and said there was no evidence that the knife had been "thoroughly washed" -- as was argued by the prosecution in the original case.

Conti also told the court that the glove used by the police while handling Kercher's bra, allegedly containing Sollecito's DNA, was "dirty." Conti showed a blown-up photo of the white glove to prove his point.

The two court-appointed experts said Monday that the bra clasp, a key piece of evidence, had been kept in such a poor way that it was covered in rust, and further testing was futile.

A letter from Piero Angeloni, head of the Italian forensic police service in Rome, was read to the court in Perugia on Saturday defending the work of his department, for which Stefanoni works.

The service had never been subject to criticism before and used state-of-the-art equipment, his letter said.

The professors emphasized that they had both worn masks, gloves, paper suits and used sterile knives and scissors during their retesting at Rome's La Sapinenza University.

The two said that, studying the original report, it was clear that "numerous people had been in and out of the crime scene" and that "objects had been moved," which again put all evidence at risk of contamination.

In a point-by-point deconstruction, the experts said that because of the errors made by police during the original investigation, the evidence against Knox and Sollecito should be considered "inadmissible."

The court adjourned until September 5.

"Even though the prosecutors tried to trip up the experts, they stood firm in their conclusion and their report," she said.

"They have not given us proof of contamination. They've confirmed Sollecito's DNA profile on the bra clasp was there. I think that they were unable to clarify the points that they had so vehemently brought up in their report," he said.

Kercher, a University of Leeds student from Coulsdon, Surrey, was discovered with her throat slit in November 2007 just two months after she arrived in Italy during her year abroad.

A third defendant, small-time drug dealer Rudy Guede, an immigrant from the Ivory Coast, was also jailed in connection with the brutal killing. He received a 30-year sentence for murder and sexual violence following a fast-track trial in October 2008. His sentence was later cut to 16 years.

CNN's Hada Messia and Nick Pisa contributed to this report.