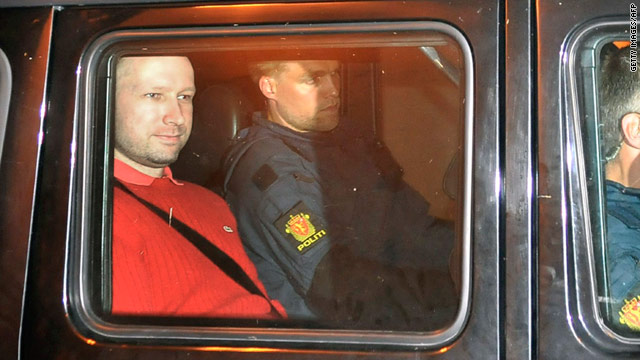 (CNN) -- The suspect in Norway's terror attacks bought chemicals and tools on eBay that helped him kill 77 people this month, according to a British newspaper.

The Sunday Telegraph, which said it investigated thousands of online transactions over a seven-month period, has reported that Anders Behring Breivik used eBay to procure sulphur powder, which the newspaper described as a key ingredient for the bomb that exploded in Oslo, killing eight people.

The Sunday Telegrah also said that Breivik, under the username "andrewbrei," used eBay to order a drill press vice, a full-face respirator and a "hazmat" suit.

In addition to the Oslo bombing, Breivik is accused of opening fire on Utoya Island, killing 69 people on July 22.

EBay Inc did not respond directly to the Sunday Telegraph report, but released a statement that made reference to the Norway attacks and said that the company is working with local authorities.

Outpouring of grief in Norway

"We are deeply saddened by the recent events in Oslo and our thoughts are with the victims and families involved in this horrific incident. eBay and PayPal coordinate regularly with law enforcement around the world and we are assisting Norwegian law enforcement in their investigation," the company statement said.

Breivik, who is being held in solitary confinement at Ila Prison, near Oslo, mentioned eBay repeatedly in his purported 1,500-page manifesto that rants against Muslims and lays out meticulous plans to prepare for the attacks.

The author of the manifesto described how he used eBay to procure various items, some of which were not discovered during the Sunday Telegraph investigation, suggesting Breivik could have had more than one eBay account, the newspaper reported.

"Ebay is not the best place to look as it is mostly civilian body armour available. But now and then, some inexperienced sellers simply make a mistake and list high grade mil spec armour and some times, Ebay is unable to stop the auction in time, which allows you to 'swoop in and pick it up' with a winning bid. I finally managed to buy 2000 USD worth of plates," the manifesto author wrote.

At another place in the manifesto, the author told his readers: "Ebay is your friend."

Breivik has admitted carrying out the bombing in Oslo and the shootings on Utoya, his lawyer and a judge have said. He has also pleaded not guilty in court.

The attack on Utoya targeted members of the Norway Labour Party's youth movement as they attended a summer camp.

Norwegian authorities completed the identification of the dead last week, releasing the names of all 77. Their ages ranged from 14 to 61.

CNN's Anna Stewart in London contributed to this story