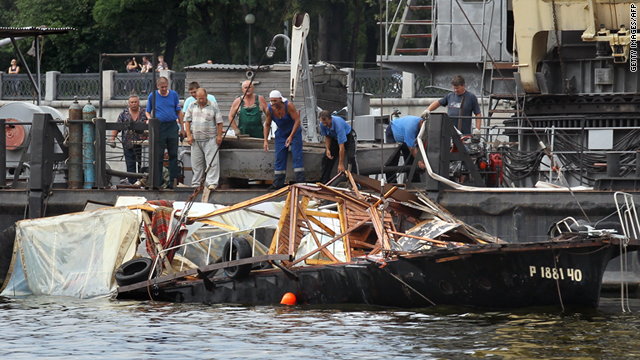 Rescue workers examine the wreckage of the sunken boat in the Moskva river in Moscow, Russia, on July 31.
STORY HIGHLIGHTS
RELATED TOPICS

Moscow (CNN) -- The death toll has risen to seven in a boat collision Sunday in the center of the Russian capital, state media reported.

A private boat carrying 16 people collided with a cargo barge on the Moskva River in Moscow then sank, according to Russia's RIA-Novosti official news agency. The people onboard had been celebrating a birthday.

Rescue efforts are under way, and a crane is expected to arrive at the site of the collision to help free the private boat, which is still wedged under water.