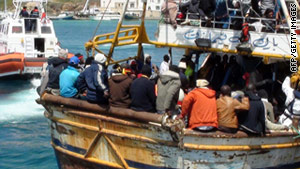 More than 30,000 refugees from Tunisia and Libya have risked this dangerous journey to Lampedusa in the last year.
STORY HIGHLIGHTS
RELATED TOPICS

(CNN) -- Italian authorities found 25 dead bodies in a boat that was carrying refugees and was discovered off the coast of the southern island of Lampedusa, an Italian official news agency reported Monday.

The bodies of the victims -- all males -- were found during an inspection of the boat after it was accompanied ashore, the ANSA news agency said. Officials could not immediately say how the men died nor did they know from where the boat departed.

The boat was also carrying 271 other passengers, including 36 women and 21 children, the news agency said.

Lampedusa, the closest Italian island to Africa, has become a destination for tens of thousands of refugees seeking to enter European Union countries.

More than 30,000 migrants and refugees from Tunisia and Libya have risked this dangerous journey to Lampedusa in the last year.

Lampedusa and Malta, both islands less than an hour's flight from the North African coast, have taken the brunt of the subsequent wave of migration.

At one point, the population of migrants vastly outnumbered Lampedusa's residents, who number about 6,000.