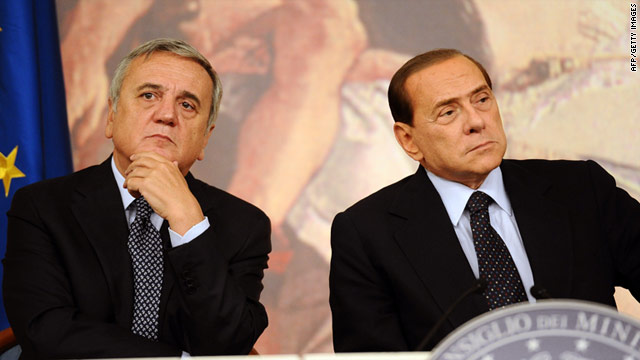 (CNN) -- Italy has found itself at the center of spiralling economic concerns in recent days. Fears that it might default on its huge debt have pushed up the cost of government borrowing and led Prime Minister Silvio Berlusconi to address lawmakers in a bid to reassure the markets.

Stock markets in the United States, Europe and Asia plunged Thursday and Friday amid fears about a global slowdown and anxiety that the kind of troubles seen elsewhere in Europe might drag Italy down, too.

A warning by European Commission President Jose Manuel Barroso that the euro area crisis was spreading beyond a handful of smaller members did nothing to help.

"We are no longer managing a crisis just in the euro area periphery," he said, as he urged European leaders to act quickly to carry out reforms. "Euro area financial stability must be safeguarded."

So what is behind the current crisis around the euro zone's third-largest economy? And what could it mean for Europe and the world if it escalates?

Domenico Lombardi, a senior fellow at the Brookings Institution and former International Monetary Fund executive board member, says the roots of Italy's troubles lie in its huge public debt and low growth rate.

Italy's economy has been growing at only 0.3%, he said, and most importantly is projected to grow at a similarly feeble rate for the next few years.

"This very low rate of growth really is one of the lowest in the world," he said, "and on top of that Italy has a very high public debt."

That debt stands at about 120% of gross domestic product (GDP) -- or in other words, a fifth more than the country's annual economic output -- and is one of the highest in the world, bar that of Greece, which has had to be bailed out by Europe.

Put these two factors together in Italy and it "becomes clear that the economy is not going to be able to generate enough resources to pay for its debt," Lombardi says.

Douglas McWilliams, chief executive of the London-based Centre for Economics and Business Research, also believes that Italy is not growing strongly enough to prevent its GDP ratio rising to unsustainable levels.

He warned in a report Thursday that Italy was "bound to default" on its debt -- although Spain, also facing rising borrowing costs, might not -- saying: "Greece cannot sort out its debt problem and realistically the same is the case for Italy."

Barroso's statement later Thursday said the rising cost of borrowing for Italy and Spain was "a cause of deep concern." But, he insisted, the bond markets' reaction was "clearly unwarranted on the basis of economic and budgetary fundamentals" in those two countries.

"In fact, the tensions in bond markets reflect a growing concern among investors about the systemic capacity of the euro area to respond to the evolving crisis," he said, in a statement that fueled anxiety about broader European stability.

Berlusconi also sought to push back against the idea Italy was in particular danger, with an address to Parliament a day earlier in which he said the economic challenges it faces need "to be tackled with determination and without panic."

"We do not deny we are facing a crisis," he said, but stressed Italy's banks, institutions and political system were strong enough to cope.

"Our economy is solid," he said. "Our banks are solid. They are well capitalized. They have liquidity. They have overcome the stress tests."

But the speech was light on concrete policy measures, analysts say, and may not have been enough to deter market speculators who now have Italy in their sights.

Professor Iain Begg of the London School of Economics told CNN that while Berlusconi's public return to the helm on the economy was welcome after a conspicuous absence, Italy's mercurial prime minister is also a part of the problem.

Italy under Berlusconi has failed to "grasp the nettle of economic reform" to tackle low growth over a sustained period, Begg said. In addition, he said, Berlusconi erred last month by publicly criticizing Finance Minister Giulio Tremonti (who is himself troubled by corruption allegations) over recently announced austerity measures.

"As soon as you start playing these kind of games politically, the markets smell blood and as soon as they scent it, they start tearing flesh," Begg said.

He argues that Italy should not be in trouble in the first place because although its debt is high, it is not rising.

Also, the public-sector deficit -- the gap between taxation and expenditure -- is very low at 4% compared with other countries, such as 10% in the UK and 11% in the United States. Italy isn't exposed to the same kind of property bubble as Spain and its banking system is strong, Begg said.

But other elements, like the new debt deals agreed for Greece, Ireland and Portugal, have paradoxically pushed up borrowing costs for Italy to record levels -- with bond yields, or interest rates on government debt, reaching 6% -- and put it under greater pressure, he said.

Unlike McWilliams, Begg believes Italy is highly unlikely to default on its huge debt -- but its situation is nonetheless "precarious" if it wants to avoid years of low growth.

However, anxieties over Italy's economic future have led many to wonder what its default might mean for Europe and beyond, with the dreaded word "contagion" on many lips.

Lombardi believes the current situation is serious. "If you affect Italy, you can really weaken the euro significantly," he says, describing it as the "weakest link" among Europe's big economies.

Worse, he says, the European Union, the IMF and the European rescue fund do not have enough money to bail it out as they did smaller European economies -- sparking a potential domino effect.

So far the crisis has been limited to Greece, Ireland and Portugal, he said.

"But of course if the crisis was to hit Italy, it would spread also to France, to the rest of the euro area, and of course you would have contagion to the U.S. through the banking system."

The huge public debt held by the United States also would make it more vulnerable to speculators, he added.

Andrea Rebusco, head of trading services Italy for IG Markets, told CNN the mood in Italy was grim although he does not believe his country's situation is drastic.

While the government had done the right thing in passing the austerity measures, he said, it came too late. "People don't see enough effort from the politicians to stimulate the economy and carry out structural reforms," he said.

His message is echoed on the streets of Rome.

Maria Leone has run a small but popular beauty center in the heart of the city for decades but is pessimistic about the current situation. "It's a disaster, a very difficult moment," she told CNN. "Everyone asks for discounts. None of Berlusconi's laws have helped small businesses like mine.

"Compared to the past we need to be more competitive, but it's an unfair competition, against immigrants that run their businesses out of any control, and against big globalized companies."

Mauro Servini, a 34-year-old barman in Rome, is single and doesn't think he'll ever have a family because he earns too little.

"I hate Berlusconi and all the politicians. They should first think about cutting their salaries and being a good example for the nation," he said. "My future...? Better not to think about it."

So what does Italy need to do next?

Experts seem to agree that economic reforms are needed in order to stimulate growth and that Italy should stick to the terms of its new austerity package, with cuts to public services and the social welfare system over the next decade.

The country must also invest in research and development and reform its labor markets to make its companies competitive against those of emerging economies, they say.

Italy also needs the support of its partners in Europe, including the other big economies such as Germany and France, and institutions like the European Central Bank. Italy's politicians must also present a completely united front to ward off increased speculation, Begg said.

And the picture is not altogether bleak. Unemployment in Italy, at just over 8%, is not as high as in Spain or Greece, Begg said, giving more leeway for the government to carry out tough reforms and the economy to be turned round.

Orsola Longhini, a 24-year-old student in Rome who completed a degree in art and has just started a second one in psychology, told CNN she could see a brighter future ahead.

"I don't pretend to have the standard of life that my parents gave me, but I'll make it and, one day, I'll have a job as art therapist and a family as well. I'm investing in a serious education, hoping that one day I will be able to do what I really want."