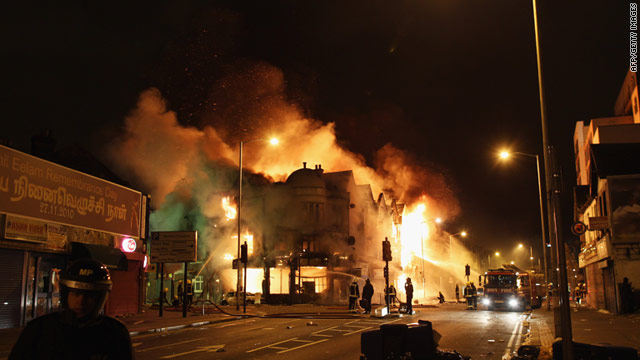 London's riot-hit streets have been compared to Mogadishu by one German magazine.
STORY HIGHLIGHTS

London (CNN) -- A country overrun by rioters. A government facing questions over policing. Its leader accused of having lost legitimacy.

Sound familiar? But this week, rather than another country swept by an Arab Spring-style democracy movement, it was Britain feeling the heat.

And turning the tables, after enduring sustained criticism from the West, it was authoritarian regimes such as Iran and Libya that delighted in mocking Britain over riots that have engulfed its major cities.

The criticism came as other nations around the world reassessed their usually peaceful views of the UK, revising official advice to Britain-bound travelers and publishing newspaper headlines and editorials likening London to troublespots such as Somalia's Mogadishu.

Iranian President Mahmoud Ahmadinejad, a favorite target of international indignation for his saber-rattling speeches and his country's treatment of activists in 2009 democracy protests, landed his punch on Wednesday as Britain reeled from its latest night of trouble.

With tongue no doubt planted firmly in cheek, Ahmadinejad apparently made an speech to reporters in which he condemned Britain's police for brutality shown against "opposition" protesters, the official IRNA news agency said.

His comments followed similar condemnation by the Libyan regime of Moammar Gadhafi, which called for UK Prime Minister David Cameron to step down. With barely-concealed relish, saying he had "lost all legitimacy" because of the riots shaking Britain.

"Cameron and his government must leave after the popular uprising against them and the violent repression of peaceful demonstrations by police," Gadhafi's Deputy Foreign Minister Khaled Kaaim said, according to a report by the AFP news agency.

"These demonstrations show that the British people reject this government which is trying to impose itself through force," he said, urging the U.N. Security Council "not stay with its arms crossed in the face of the flagrant violation of the rights of the British people."

It wasn't just Britain's erstwhile adversaries reassessing their views in light of the rioting, looting and arson attacks that have spread from the capital to other major cities. Many close allies were advising their citizens to rethink travel plans.

These demonstrations show that the British people reject this government which is trying to impose itself through force
--Khalid Khaiim, Gadhafi's depurty foreign minister
RELATED TOPICS

A warning from the United States State Department stopped short of instructing Americans to avoid the UK, but did urge them to leave affected cities and to "not challenge debate or make unwise comments" to reduce risk of violent attack.

Austria, Denmark, Finland, France Germany, Latvia and Sweden, also urged its citizens to be cautious -- as did Malaysia, which was stunned by a widely aired video that showed a Malaysian student, bleeding from an earlier attack, helped to his feet by people who then stole the contents of his backpack.

International media also took a dim view. Germany's Der Spiegel magazine commented that "television images dominating screens this week could be right out of Mogadishu" rather the UK.

One Russian media outlet reportedly described even more dramatic, if somewhat fictitious scenes, claiming that the looting of London's zoo had released dangerous animals onto the street. The Rossiya 24 report, picked up by the BBC's international news monitoring service, was denied by zoo officials.

The French press pulled no punches. The Liberation newspaper said the riots were a wake-up call for Britain's unequal society, according to a round-up carried on the RFI.fr website.

And then there were the bloggers. In Egypt, still coming to terms with the people-power protests that toppled former president Hosni Mubarak, some expressed bemusement at the actions of London's looters.

And among cricket fans on Twitter, there was debate over whether it was safe enough in the UK for the Indian national team -- currently playing a series of games in England -- to remain.

"Height of irony that the Indian cricket team, unable to visit Pakistan due to security concerns, is now stuck in their England hotel rooms," said one.

Another added: "#Londonriots had this happened in #india when #England was playing in #India, England team would have left India fearing security #cricket."