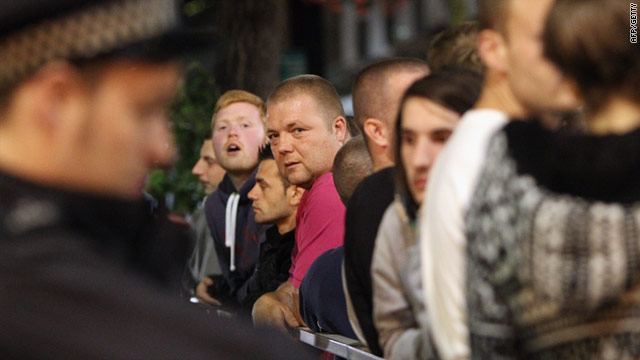 People angry about looting protested on the streets of Eltham, southeast London, August 9, 2011, vowing to protect their area.
STORY HIGHLIGHTS

London (CNN) -- As riots broke out across London, leaving shops and homes burning, and residents cowering in their homes, Elif Mills returned to her flat in the east of the city to find a burned out bus around the corner, and a mob of burly men in the street outside.

But rather than looting, this gang was working to protect the neighborhood. And far from mugging Mills, the men handed her a free kebab, walked her to her front door and promised to keep her and her terrified neighbors safe as trouble raged in streets nearby.

What Mills calls her "Turkish Army" -- dozens of shopkeepers guarding Kingsland High Street in Dalston -- was just one of many groups of vigilantes armed with makeshift weapons determined to protect their areas of London from looters.

After several nights of violence in towns and cities across England, the public backlash against the rioters has begun.

Hundreds of men wielding golf clubs, baseball bats and sticks have been patrolling areas of London -- from Southall in the west to Dalston in the east, and from Eltham in the south Enfield in the north -- and other cities to ward off gangs of rioters.

Online retailer Amazon has reported a massive spike in the sales of baseball bats and batons as Britons prepare to protect themselves.

TV producer Mills is full of praise for the groups, who she says are doing their bit to help -- at a time when police have found themselves stretched to the limit.

"They aren't doing it in a 'looking for trouble' way -- they are protecting us, and it has worked -- roads nearby have been destroyed, but this area is completely untouched.

"It's not the best thing for everyone to do, but it has worked in this situation.

"It has made me feel very safe, especially on the night when there wasn't a big police presence in the area -- I slept soundly knowing I had a 'Turkish Army' of burly guys armed with bats standing guard under my window."

In Ealing, an affluent west London suburb which was hit hard by rampaging gangs of youths on Monday evening, locals have been encouraged to come out in defiance of the rioters.

Flyers posted through the doors of homes in the area on Tuesday implored residents to "stand together to protect our streets."

"If you see any trouble, please sound your car horn," they demanded. "The aim of this is to show these despicable thugs that we will not be terrorized."

And in Enfield, which was badly affected on Saturday, the first night of the riots, residents were also out trying to reclaim the area from looters.

'We're going to set fire on the bus'

One local, who gave his name as Nick, told CNN: "We're out here looking after our town. We're all trying to do it, and yet the police are more interested in pushing us back -- it's not on. We want to look after our town."

As anger at the actions of looters grows, a jazz-singing grandmother from east London has become an unlikely symbol of the public's desire to stand up and be counted.

Pauline Pearce has been dubbed the heroine of Hackney after a video of her giving the young rioters around her a stern dressing-down went viral after being posted on YouTube.

"Why are you burning people's shops that they've worked hard to build up?" She demands of those rampaging around her.

"And for what? Just to say you are warring and a bad man? This is about a man who was shot in Tottenham, this ain't about busting up the place. Get real people!

"We're not all gathering together to fight for a cause -- we're running down footlocker and thieving shoes. Dirty thieves!"

But the Metropolitan Police has warned against vigilantism, calling on members of the public not to put themselves in harm's way, after several incidents where those who tried to step in found themselves under attack from the looters.

In Ealing, a man was left with critical head injuries after he tried to remonstrate with a gang of young rioters who had set bins on fire, and was attacked.

"These are testing times and I urge the public to remain vigilant and report any information you have to police," said Ealing Borough Commander Andy Rowell.

"If you do experience further disorder, I urge you to contact police and not take steps to try and intervene yourselves, this will put you and others in danger - please allow the police to tackle these crimes."

Instead they have urged people to help identify those responsible for the riots and looting.

The Metropolitan Police's Flickr stream of CCTV images of the rioters had been viewed by more than 300,000 people by Wednesday afternoon.

The Sun, Britain's biggest-selling tabloid newspaper, caught the mood of many on Wednesday with its "Shop a moron" campaign, encouraging readers to name and shame those caught looting on security cameras.

And others have taken a practical stand, rolling up their sleeves to join in clean-up operations across London and in Birmingham and Manchester.

Organized via Twitter, using the hashtags #riotcleanup and #broomarmy, and on websites riotcleanup.co.uk and broomarmy.co.uk, hundreds of people have helped sweep broken glass from the streets and repair wrecked shops.

Manchester resident Rachel said she and her friends were planning the clean-up even as riots in the city were going on.

"Manchester people are very resilient and they're not going to let this beat them. Once things calm down we're going to go out together onto the streets and start tidying up the mess that they've left in the city," she said.

However they choose to go about it, it seems the British public is only too happy to join in with what Prime Minister David Cameron has called the "fightback" against the rioters.

"We will not allow a culture of fear to exist on our streets," Cameron said.