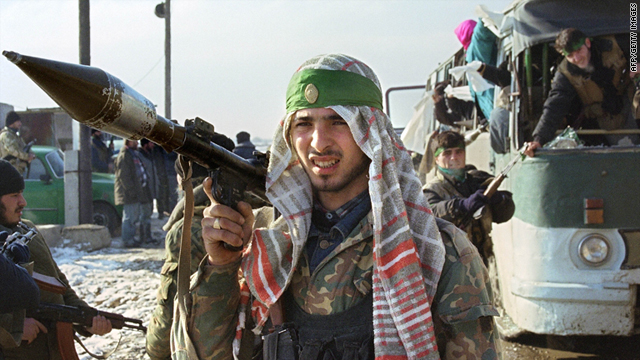 Rebels in Chechnya began fighting for independence in the 1990s, but the fight has become aimed more at imposing Islamist rule.
STORY HIGHLIGHTS
RELATED TOPICS

The Russian Investigative Committee said the bodies of two of the attackers have been identified. They were both Chechens, born in 1989 and 1990, the committee said.

In an emergency video conference with the country's top police officers Wednesday, Russian Interior Minister Rashid Nurgaliyev gave the casualty figures for what he called the "cruel terrorist act."

President Dmitry Medvedev instructed Nurgaliyev to conduct a thorough investigation and render all possible assistance to the families of the dead and the injured, the Kremlin reported on its website.

Rebels in Chechnya started out fighting for independence in the 1990s, but in recent years the fight has been aimed more at imposing Islamist rule and asserting their authority in the area.

The standard of living in the southwestern republic is poor compared with the rest of Russia. Unemployment is rampant and infant mortality is high. In addition, the Chechen population of about 1 million is mostly made up of Sunni Muslims, who maintain a distinctly separate cultural and linguistic identity from Russian Orthodox Christians.