Berlusconi under fire for controversial comments about Italy 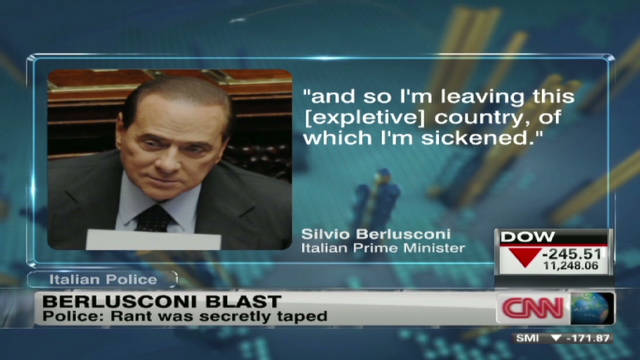 Rome, Italy (CNN) -- Italian Prime Minister Silvio Berlusconi has stirred controversy in Italy after investigators said they recorded him describing Italy as a "sh--ty" country that "sickened" him.

Citing phone calls that authorities said they secretly recorded, investigators quoted Berlusconi as saying he's frustrated with investigations of him and is eager to leave Italy. The quotes were in an arrest warrant for people who have been charged with trying to blackmail the prime minister.

"They can tap my telephone calls. I don't give a f---," the warrants quote Berlusconi as saying. "I'm getting out to mind my own f---ing business, from somewhere else, and so I'm leaving this sh--ty country, of which I'm sickened."

Berlusconi's political opponents criticized him for the reported remarks.

"Having a prime minister who values his own country in such a mean-spirited way is like living in the Third World," the Italian news agency ANSA quoted Antonio Di Pietro of the center-left Values Party as saying.

Another political opponent, Luigi Zanda of the Democratic Party, told the Italian daily La Repubblica that "it is the Italians who are sick of" Berlusconi, ANSA reported.

Hours after his reported remarks came to light on Thursday, Berlusconi made clear that he did not plan to go anywhere, the news agency said.

According to reports, Berlusconi said his comments are "one of those things that you say on the phone late at night, when you are relaxed."

Berlusconi is said to have made the comments during a phone conversation with Valter Lavitola, a journalist for whom authorities have issued an arrest warrant.

Investigators say Lavitola was the payment link between the prime minister and two people -- Gianpaolo Tarantini, 36, and Tarantini's wife, Angela Devenuto, 34 -- who have been arrested on charges of trying to blackmail Berlusconi. Lavitola is thought to be out of the country.

The blackmail allegations are linked to a sex scandal that has dogged Berlusconi for months.

Tarantini is accused of paying escorts to go to parties with Berlusconi. He has said the leader was not aware of the payments.

Tarantini said he will cooperate with authorities. He denied he blackmailed Berlusconi, to whom he expressed his "gratitude for all that he did for me and for my family."

Berlusconi said he gave money to Tarantini as a gift, not as a response to blackmail.

In a separate case, Berlusconi is on trial in Milan for allegedly paying for sex with a then-17-year-old Moroccan belly dancer named Karima el Mahroug, nicknamed "Ruby the Heart-stealer."

He is charged with abuse of power because prosecutors say he phoned a police station -- where she was being held on theft charges -- to have her released.

Berlusconi has repeatedly denied all of the allegations, even joking about how unlikely it is that a man his age would be capable of the sexual feats some have claimed. "I'm 74 years old and, even though I may be a bit of a rascal, 33 girls in two months seems to me too much even for a 30-year-old."