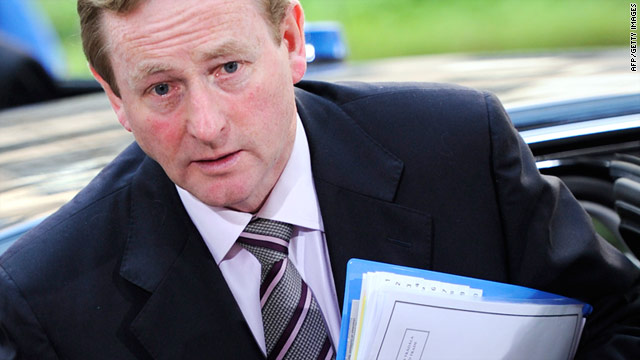 (CNN) -- The Vatican has rejected criticism that church leaders sought to cover up extensive abuse of young people by priests in Ireland, in a lengthy statement sent to the Irish government Saturday.

The Vatican response follows a biting attack by Irish Prime Minister Enda Kenny in the wake of the Cloyne report, published in July, which investigated abuses in the diocese of Cloyne, near the southern city of Cork.

Addressing lawmakers, Kenny claimed the report exposed the Vatican as trying to hinder an inquiry into child sex abuse for its own benefit and said it revealed the "dysfunction, the disconnection, the elitism that dominate the culture of the Vatican to this day."

Irish lawmakers then passed a motion deploring "the Vatican's intervention which contributed to the undermining of the child protection framework and guidelines of the Irish State and the Irish Bishops."

Tthe Vatican responded to the criticism by Kenny and other Irish lawmakers by recalling its envoy to Ireland, Archbishop Giuseppe Leanza.

Saturday's 25-page statement is the latest development in a row that has seen an unprecedented rift open up between the Vatican and Ireland, a heavily Roman Catholic country.

The Vatican response takes issue with Kenny's statement to lawmakers, saying "the accusation that the Holy See attempted to frustrate an inquiry in a sovereign democratic republic is unfounded."

It also says that many of the criticisms and allegations made against it in the Cloyne report appear to result from the way a 1997 letter to the Irish Bishops' Conference from the then-papal nuncio was read -- although it acknowledges the letter is open to "misinterpretation" if taken out of context.

Detailing letters and reports issued by the Vatican, it questions the conclusions drawn by investigators as to the Church's approach to dealing with complaints of by priests.

"The Holy See does not accept that it was somehow indifferent to the plight of those who suffered abuse in Ireland, as Mr Kenny implied in his speech" to lawmakers, the statement says.

Rather, it says, the Holy See "devoted considerable attention to the Irish situation," through meetings with Irish bishops and directions given by the Pope to Irish church leaders.

The Vatican also expresses its regret for the abuses committed, acknowledges instances were sometimes mishandled and says it is confident new measures brought in in Ireland and elsewhere will prevent such "deplorable acts" recurring.

"In a spirit of humility, the Holy See, while rejecting unfounded accusations, welcomes all objective and helpful observations and suggestions to combat with determination the appalling crime of sexual abuse of minors," the statement says.

The Vatican response was welcomed by the head of the Catholic Church in Ireland, Cardinal Sean Brady.

"The reply conveys the profound abhorrence of the Holy See for the crime of sexual abuse and its sorrow and shame for the terrible sufferings which the victims of abuse and their families have endured within the Church of Jesus Christ, a place where this should never happen," he said in an online statement.

Released July 13, the 421-page report into the handling of abuses in the diocese of Cloyne -- near the southern city of Cork -- demolished claims by the Catholic Church in Ireland that policies it put in place in 1996 had enabled it to get a handle on the problem.

It also accused Bishop John Magee, who was responsible for policing abuse in his diocese, of not backing the policies himself and failing to take action against abusers.

The report detailed how complaints against 19 clerics in the diocese were dealt with between 1996 and 2009 by church and state authorities.