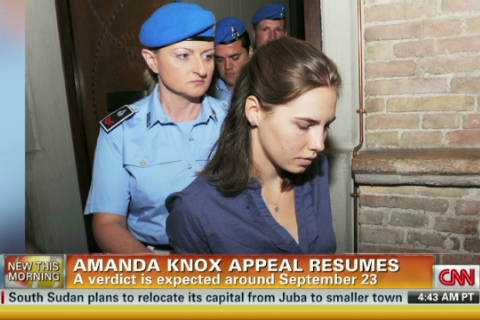 The questions put to Patrizia Stefanoni focused on a key piece of evidence -- a clasp on a bra belonging to murdered British student Meredith Kercher.

The defense team is seeking to demonstrate that DNA evidence used in Knox's original trial is not conclusive as she appeals her conviction and 26-year sentence for the 2007 murder of her housemate.

Two new forensic experts, professors Carla Vecchiotti and Stefano Conti, cast doubt this summer on the DNA evidence that played a role in the convictions of Knox and ex-boyfriend Raffaele Sollecito in 2009.

Vecchiotti and Conti said the clasp from Kercher's bloodied bra, which allegedly contained Sollecito's DNA, was "dirty" and had been allowed to rust, making further testing futile. The evidence, the two argued, should be "inadmissible."

But Stefanoni defended the methods and equipment used in the investigation under questioning Tuesday in a Perugia court by prosecutor Manuela Comodi.

Stefanoni said the machine used for the DNA examination was clean -- and rejected suggestions the clasp had been contaminated. She said it had been moved but not turned over or stepped on at the scene.

The hearing adjourned Tuesday after highly technical and heated debate as Adriano Tagliabracci, a forensic expert for Sollecito's defense team, testified in support of the findings of Vecchiotti and Conti.

More argument over the DNA evidence in the case is expected Wednesday.

But speaking outside court Tuesday, prosecutor Comodi said she considered that Stefanoni and a prosecution forensic expert, Giuseppe Novelli, had clearly proven the good work they had done.

She suggested the prosecution team could ask for another DNA examination to be carried out.

Francesco Maresca, an attorney for Kercher's family, echoed that message, saying the independent forensic team could have done more tests if they had doubts about the DNA evidence.

Earlier, forensic expert Francesca Torricelli, used by the Kercher family's attorney, questioned in her testimony why the independent experts had not tested the small amount of DNA material found on another key piece of evidence -- a knife from Sollecito's home that prosecutors in 2009 said had traces of Knox's genetic material on the handle and Kercher's in a tiny groove on the blade.

Vecchiotti testified in earlier hearings that the knife tested negative for blood and the amount of DNA said to be Kercher's was so low, it could not be examined again with any conclusions.

But Torricelli said Tuesday she had witnessed the work of Vecchiotti and Conti, and that the machinery they used during their investigation could check extremely low quantities of DNA.

Meanwhile, Novelli told the court that for him, and others, it was not a question of "quantity of DNA, but rather quality" to carry out a successful examination.

Vecchiotti and Conti have said records about the machine that did the DNA testing were missing, suggesting the testing process may have been unreliable.

On Monday, the prosecutor said the records had been found and asked the judge to admit them as evidence.

The defense argued they should not be admitted because they were not in the files originally given to the new experts. Comodi said Vecchiotti and Conti could have had them if they had asked for them.

Knox's father, Curt, told reporters outside court Monday that he believed the independent experts "have done a very good job in evaluating the information ... and I don't see it breaking down at this point. I see that it has been good for Amanda."