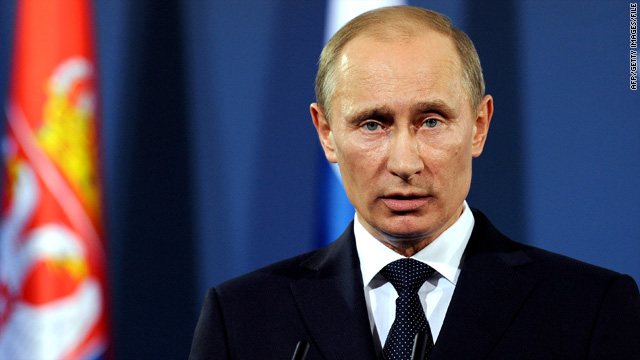 Moscow (CNN) -- At the height of a new round of quarreling between Russia and Ukraine over natural gas prices, Russian Prime Minister Vladimir Putin on Tuesday launched a major pipeline that will start pumping gas to Western Europe next month, bypassing Ukraine.

With the click of a computer mouse in front of flashing cameras, Putin opened the valve to let the gas into the first Nord Stream pipeline at the Portovaya compressor station at the Russian-Finnish border, a stone's throw from his hometown of St. Petersburg.

According to the Russian state-controlled gas-and-oil giant Gazprom, the 765-mile long Nord Stream pipeline -- costing more than $12 billion -- directly links Russia with the European Union via the Baltic Sea bed.

"The amount of energy that will be delivered to Germany is comparable to the combined output of 11 nuclear-power plants," Putin said. "This is a solid contribution not only to the European but also to the world energy sector."

"Gerhard, I am very glad that we have reached this point," Putin said over a glass of beer after the opening ceremony. He raised a toast to his "good friend" former German Chancellor Gerhard Schroeder, chairman of the Nord Stream shareholders' committee, a post that he accepted soon after leaving public office in 2005.

For the next 50 years, Nord Stream will supply an annual 55 billion cubic meters of gas not only to Germany but to France, the United Kingdom, the Netherlands and Denmark, Putin said.

Putin said the launch of the Nord Stream means Ukraine is finally losing its exclusive status as a transit country for Russian gas to Europe.

"Any transit country has always the temptation to take advantage of its transit status," he said. "That exclusivity is now disappearing," he said.

The final "golden weld" of the pipeline was completed on the first of Nord Stream's twin pipelines August 19, Russian state TV reported. The pipe was filled with nitrogen on the German side to act as a cushion between the air and natural gas coming from Russia. The gas will gradually displace the nitrogen and fill the pipe to a certain pressure.

It will take "about a month" to fill the new pipeline with gas, aided by a special gas treatment unit, before clients in Europe will get their regular deliveries, Gazprom said. The second stage of the pipeline will be put into operation next year.

Russian Deputy Prime Minister Igor Sechin, who is in charge of the country's energy sector, said lines could be added to the project, in light of the current disagreements between Russia and Ukraine.

However, energy experts point out that even despite the opening of new transport routes, Ukraine will continue to play a pivotal role for the Russian gas exports in years to come.

Speaking in national parliament Tuesday, Ukrainian President Viktor Yanukovych criticized Ukraine's 2009 gas contract with Russia, which he said was "disadvantageous" to his country.

And one day earlier, in an interview with Kommersant Ukraine daily, Yanukovych said that compared with Ukraine, Germany pays a lower price for the Russian gas.

"We would like to understand what we are being punished for," Yanukovych said. "We are overpaying about $5 billion to $6 billion annually. ... About 20% of the country's national budget is spent on (Russian) gas. We think it's not fair, and our economy can't sustain that price for long.

"We would like to pay what the Germans are paying," he said.

Yanukovych said his country has for a year and a half been in futile negotiations with Russia about changing the terms of the bilateral gas agreement signed by former Ukrainian Prime Minister Julia Tymoshenko, his political archrival.

Tymoshenko, who lost a close presidential election to Yanukovych in 2009, is being held in a pre-trial jail in Kiev. She is charged with abuse of authority in signing the gas contracts with Russia, which Ukraine's prosecutor general's office believes resulted in damage to Ukraine worth almost $190 million. The trial against Tymoshenko has been going on since late June.

Yanukovych told Kommersant Ukraine that if Russia doesn't revise the 2009 contract, Ukraine will bring the case to international courts. The paperwork for a lawsuit has been drafted, he said.

"We have an impression that our Ukrainian partners got on a train called 'Cheap Russian Gas' and don't know what station to get off at, they don't know that they might be heading for a dead end," Miller said. "All that is in the contract has to be fulfilled right until (its expiration at) the end of 2019."

Disputes over energy prices have been the main sticking point in the relations between the two countries since the collapse of the Soviet Union in 1991. Russia retained its vast oil and gas reserves, while the largest pipeline network to Western Europe -- the main customer of those energy riches -- ended up in Ukraine's territory. Ukraine is buying Russian gas for its domestic consumption and at the same time charges Russia transit fees for all its gas exports going west.

In 2006, the conflict was exacerbated when Russia cut off its supplies to Ukraine for not agreeing to pay what it was asking for gas, while the latter siphoned off Russia's gas deliveries to Europe to compensate for its own shortages.

But three years later, the gas war reached a further unprecedented scale. For about two weeks of an unusually cold winter in Europe, most European customers were freezing, being cut off from Russian gas supplies as the two former Soviet countries crossed horns in a commercial dispute and didn't want to yield to each other.

And over the past few years, Russia has had much the same oil and gas disputes with its other western neighbor, Belarus.

But Western governments have repeatedly criticized Russia for its arm-twisting tactics against its less rich neighbors in economic matters and for using its vast energy resources as a weapon to impose its political will across the former Soviet states, accusations that Russia denies.