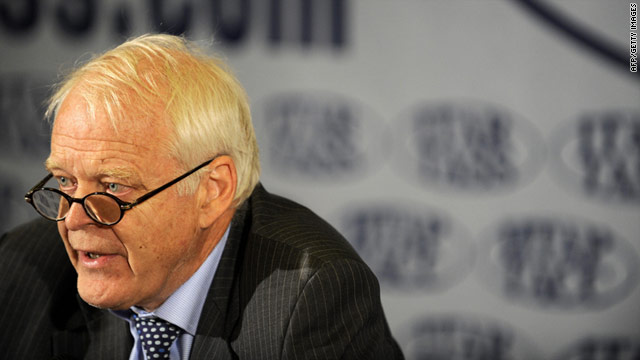 (CNN) -- Romania insisted Wednesday there was no evidence it had hosted secret CIA prisons as part of the United States' "global war on terror" after September 11, 2001.

The country "has no information whatsoever showing that there existed secret CIA detention centers on its territory," the Foreign Ministry told CNN.

Two investigations also failed to find any evidence that the CIA used Romanian airports for "rendition," the process in which detainees in American custody are transported for questioning to other countries where prohibitions on torture are not as strict and American laws don't apply.

The Romanian denial comes in response to a plea from the human rights commissioner for the Council of Europe that countries that have hosted secret CIA prisons come clean.

Thomas Hammarberg said Romania, Poland and Lithuania were among at least seven countries that hosted "black sites" for "enhanced interrogation" during the "war on terror."

"Darkness still enshrouds those who authorized and ran the black sites on European territories," he said. "The full truth must now be established and guarantees given that such forms of co-operation will never be repeated."

CIA officials have acknowledged the rendition program, but refused to discuss details and denied violating any laws. Efforts to challenge the agency and get details about it in U.S. courts have been turned aside.

Hammarberg said the CIA had held "high-value detainees," including alleged 9/11 mastermind Khalid Sheikh Mohammed, in Poland between 2002 and 2003.

The Polish site closed and a new secret prison opened in Romania in 2003, Hammarberg charged, and existed for more than two years. Lithuania also hosted two sites, he said.

Polish prosecutors and Lithuanian lawmakers have investigated the phenomenon, but Romania has shown "little genuine will to uncover the whole truth," Hammarberg charged.

"Effective investigations are imperative and long overdue," he said.

Poland's Ministry of Foreign Affairs said it would not comment while prosecutors in the country are still investigating. Lithuania has not responded to CNN questions about the issue.

Hammarberg's statement comes as documents seized from Moammar Gadhafi's compound in Libya shed light on the program of extraordinary rendition.

CNN saw a March 6, 2004, CIA letter to Libyan officials about Abdel Hakim Belhaj, a former jihadist with the Libyan Islamic Fighting Group and now a senior commander in the anti-Gadhafi forces.

It concerned the Malaysian government's arrest of Abdullah al-Sadiq, Belhaj's nom de guerre for his rendition. A CIA officer said the man and his pregnant wife were being placed on a commercial flight from Kuala Lumpur, Malaysia, to London via Bangkok and then on to Libya.

Belhaj fought for the Taliban in Afghanistan, but left after their fall in 2001 and was arrested in Malaysia in 2004. After some questioning by the CIA, he was sent back to Libya and jailed.

The Council of Europe is a 47-member group that promotes democracy and human rights on the continent.