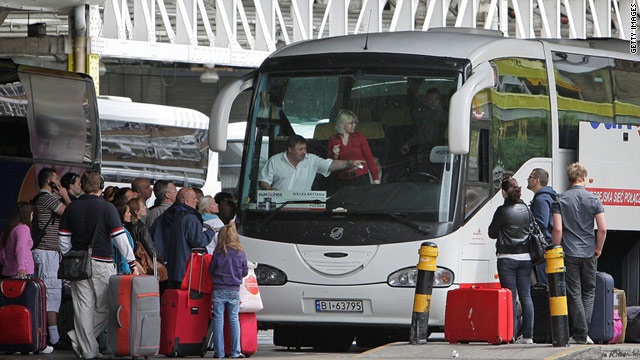 Passengers board a bus leaving for Poland from London
STORY HIGHLIGHTS

After six years living in the UK -- as a student and then working in banking -- Krzysztof Waliszczak has moved back to his native Poland.

He is now working for a global bank in his hometown of Krakow.

Waliszczak, 27, would have made the move back a year or so sooner, but originally struggled to find a good job in Poland during the height of the global economic crisis.

The final trigger that made him renew his efforts was his mother's illness, and -- with the help of a London-based recruitment agency, specializing in helping professional Poles find work in the service sector back home -- he was able to secure a job quickly.

Waliszczak is just the kind of person the Polish government wants to attract: highly educated and skilled young people who moved abroad after accession to the European Union in 2004.

The 'Have you got a PLan to return?' program was perceived by migrants as propaganda
--Krystyna Iglicka, economics professor

According to Poland's Central Statistical Office, around two million Poles moved abroad between 2004 and 2009, with 70% staying longer than a year.

While the rate leaving has since slowed, there has not been the expected rush to return after Poland became the only European Union nation to avoid recession in recent years.

How Poland became only EU nation to avoid recession

In 2008, the Polish government launched a campaign "Have you got a PLan to return?" targeted at Poles working abroad.

In a press release at the time, it said that deteriorating economic situation in Western Europe, combined with positive forecasts for Poland's own economy was expected to draw people back.

Maciej Szczepanski, co-ordinator of Powroty, the website set up as part of the campaign, said: "It's never been our aim to try to convince people to come back because it's a personal decision.

"But if someone is going to come back, we want to make it easier for them and provide all the information they need."

He added: "Many Poles who have worked in London can have much better careers coming back than they could staying in London."

Krystyna Iglicka, professor of economics at the Center for International Relations in Warsaw, said Poland had failed to attract the returnees it so desperately needs.

She said: "The Polish government would be very glad to have returnees, but it's too late. The 'Have you got a PLan to return?' program was perceived by migrants as propaganda."

She added: "We are losing population, we are losing young people and we are losing highly educated people. These are also people of reproductive age and once they have children abroad it becomes harder for them to come back.

"It's a problem for our demography and for our future."

Iglicka said returning was hard for many migrants who had been working below their skill level abroad, and then found they didn't have the skills to fit back into the labor market.

I would recommend everyone to go abroad for a few years, but in the end there's no place like home
--Krzysztof Waliszczak
RELATED TOPICS

In 2007, Christopher Hume set up a recruitment agency, AER International, based in London, to help an expected flood of professional migrants return to Poland and other Eastern European countries with booming economies.

However, the global economic crisis of 2008 has meant more of a trickle than a flood.

"The premise for the business was taken away somewhat," said Hume.

"When we have economic uncertainty people don't tend to migrate en mass, they tend to hunker down."

It was Hume's company that helped Waliszczak make his move home. Like most of Hume's clients, Waliszczak had family reasons for returning, had always planned to go home after a few years and was willing to take the drop in salary in exchange for lower living costs and better quality of life.

Hume said: "Most people returning are doing so for personal reasons. As a recruiter, we are finding when people are loosely thinking of going back, they don't do it because they can't earn as much as they would in London."

But Hume said he was expecting return migration to increase in the next few years as young professionals who left Poland in 2004 reached an optimum time in their career to move back.

He said: "There's a dearth of people with their kind of international experience in Eastern Europe, so they are moving from a highly competitive environment to one where they will be a much bigger fish.

"I think in the next two to three years, we will see an upswing in return migration about those professional groups who have been abroad for seven or eight years."

The Polish government will be hoping he is right.

Waliszczak wouldn't change anything about his experience, and believes his time abroad got him a better job than if he had remained in Poland.

"I would recommend everyone to go abroad for a few years," he said. "But in the end there's no place like home."