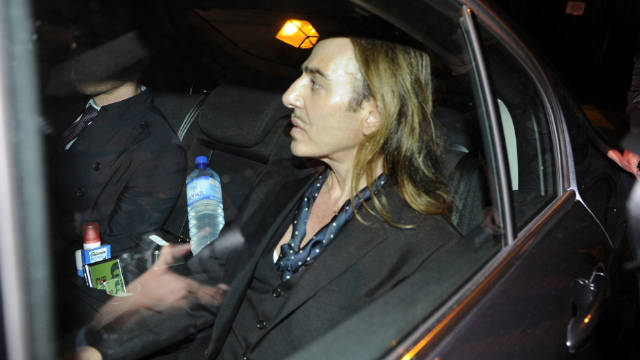 John Galliano was accused of making anti-Semitic comments against at least three people in a Paris cafe.
STORY HIGHLIGHTS

The French court gave him a suspended fine of 6,000 euros ($8,415) in total, but he was not sentenced to jail time. The three plaintiffs were awarded one symbolic euro each in damages.

Aurelien Hamelle, Galliano's lawyer, told CNN he was not surprised by the verdict.

He said the designer was happy it was all over and wants to put the whole episode behind him. Galliano was not present at the trial because he didn't want to face the media, his lawyer added.

Galliano was convicted on charges of making public insults based on origin, religious affiliation, race or ethnicity, related to two incidents at the same Paris cafe, one in February this year and one in October 2010.

He must pay a 4,000-euro ($5,620) suspended fine for the incident in February and the remainder for the incident four months earlier, the court ruled. He was also ordered to pay the costs of four anti-racism groups involved in the trial.

Galliano, who was fired by fashion giant Christian Dior in March after a video surfaced showing him praising Nazi dictator Adolf Hitler, testified at the start of the trial in June that drugs were to blame.

Judge Anne-Marie Sauteraud read out a list of the abuse Galliano was accused of hurling at Geraldine Bloch and Philippe Virgitti in February, including obscenities mixed with remarks about their ethnic backgrounds.

"He said 'dirty whore' at least a thousand times," the judge said.

Galliano said on the witness stand that he had no memory of making the comments. Asked to explain his "lack of memory," he said: "I have an addiction. I am currently undergoing treatment."

Galliano's attorney said before the trial began that the designer "was a sick person, who was suffering from addiction and this is something we are demonstrating through medical evidence, expert reports."

"We must not judge a man who for 30 years has been dedicated to diversity, who has been a loving person for all races, cultures and religions ... based on 40 minutes where he was sick through alcohol and medication," Hamelle said.

Galliano testified that he suffered from an increasing workload and that he had had no time to mourn after the 2007 death of his alter ego at Dior, designer Steven Robinson.

"With his death, I found I had no protection," Galliano said.

His body became dependent on drugs, he said. "I was taking sleeping pills during the day," he testified. "I've only just discovered since rehab what a lethal mix I was taking."

Bloch testified June 22 that she encountered Galliano on a crowded cafe terrace, which led to an angry exchange.

"I don't remember his exact wording; there were different phrases," Bloch told the court. "It's true that I was angry. I insulted him, too."

Virgitti testified that the confrontation, which he called "just an argument in a bar," began when Galliano sat down next to his party at the cafe.

"He started speaking to us very quickly after arriving," Virgitti said. "He told Geraldine to speak less as she was disturbing him. We didn't know what to do. The situation got worse. He started touching her hair, saying she had no hair. I told him, 'Don't touch her.'"

He acknowledged during his testimony that while Galliano "said things he shouldn't have," the incident "has been so overly played out in the media."

After the incident in February, Galliano was taken to a police station where a test revealed he had a high level of alcohol in his blood, authorities said at the time. He was later released.

The video is from yet another incident. He is not being tried for that incident because the couple involved chose not to press charges.

"I love Hitler," Galliano said in a video obtained by Britain's Sun newspaper. "Your mother, your forefathers would be f---ing gassed and f---ing dead."

French law prohibits the incitement of racial discrimination, hatred or violence based on a person's origin or their membership -- or nonmembership -- in an ethic, national, racial or religious group.

Galliano apologized after the video was released.

"I only have myself to blame and I know that I must face up to my own failures and that I must work hard to gain people's understanding and compassion," Galliano said in a statement. "Anti-Semitism and racism have no part in our society."

Galliano has kept a low profile since his firing, but Vanessa Friedman, fashion editor of the Financial Times newspaper, said that given time, he could return to the industry.

His career is over in its present form, she said.

But he could return to Britain, where there is "residual love for him," lay low and make a comeback in a few years, she said.

CNN's Saskya Vandoorne and Niki Cook contributed to this report.