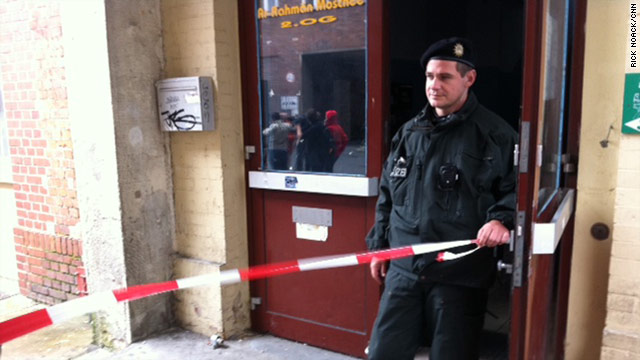 A 24-year-old German of Lebanese descent and a 28-year-old man from Gaza had tried to obtain chemicals that can be used to make a bomb, Berlin Police press officer Martin Otter told CNN.

Police do not believe the suspects had a specific target, he said, and they are not thought to have any links to international terrorist organizations.

Otter said the police operation in Berlin was over as of Thursday afternoon.

Officers earlier searched an Islamic cultural association and two other addresses in Berlin in connection with the arrests.

Law enforcement had been monitoring the men for months, police spokesman Thomas Neuendorf told CNN. He said the pair came under suspicion after they sought to acquire a large amount of cooling agent.

The arrests were made in the Kreuzberg and Neukoelln districts of Berlin, Neuendorf told reporters outside the Islamic center.

The center was searched because police believed the suspects might have stored some chemical material there as it had a lot of space, he added.

Neuendorf said many papers had been found but no explosives. The public prosecutor's office for Berlin is investigating the case, he added.

A German intelligence official, who did not want to be named because he was not specifically authorized to talk to the media, told CNN the suspected plot was thought to be Islamist.

Berlin's Al Rahman mosque was visited by investigators as well as the Islamic center, the intelligence official said.

There has been increased concern in recent years over homegrown, al Qaeda-inspired terrorism in Germany, he said.

German counter-terrorism officials are especially concerned by the spreading influence of the English-language AQAP (al Qaeda in the Arabian Peninsula) Inspire online magazine in Germany, which gives instructions on how to carry out an attack, he added.

Berlin resident Annette Suessmuth, 25, told CNN she was concerned for the safety of her two young children after the arrests.

"I am shocked. Normally I go here very often for shopping. I don't feel safe any more," she said.

The federal chairman of the German police union, Bernhard Witthaut, said the arrest of two suspects after months of shadowing was a "huge success" for Berlin's police.

He urged all Germans to remain vigilant, saying: "It is better to call the police one time too often than to stay passive."

With the 10th anniversary of the September 11 attacks on the United States only three days away, many security services around the world are on a heightened state of alert.