From Elinda Labropoulou , For CNN 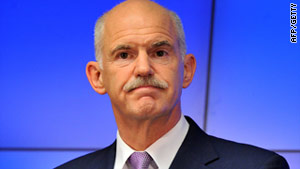 (CNN) -- Greek prime minister George Papandreou said Saturday his country will do what it takes to ensure that the country remains in the eurozone.

"We have made the decision to give a battle to avoid a disaster -- a disastrous bankruptcy for the country and the citizen," the prime minister said.

Speaking in the northern city of Thessaloniki, Papandreou said his government's top priority is to ensure a secure course and to meet all requirements towards its lenders. He said any delay "is dangerous for the country."

Papandreou said that all announced reforms will go ahead as planned. He specifically referred to the thorny issue of privatization that he referred to as "necessary for the country's development" and the opening up to competition to a number of professions.

Earlier Saturday, the first clashes were reported as thousands of Greek protesters and police fanned out ahead of an expected announcement by the country's prime minister that additional austerity measures are on the way.

But Saturday's announcement by the prime minister didn't provide such details.

Some 5,000 police officers were deployed and about a growing number of protesters -- at least 15,000 -- gathered at the various meeting points, police told CNN.

According to police, a large number of the protesters were taxi drivers who are opposing reforms to open up their sector to competition.

Police on Saturday reported the first, minor clashes between police and protesters in the northern city of Thessaloniki, but later in the day, tensions cooled.

"Protesters have been hurling stones and other objects at police officers around the venue" where the prime minister was to speak, police spokesman Athanassios Kokkalakis told CNN. "Police responded with controlled use of tear gas, but overall things remain calm."

In the Sunday edition of Kathimerini newspaper, Finance Minister Evangelos Venizelos said that "if we need to take measures of an immediate fiscal result in order to meet our targets ... these will be within a just tax system."

Papandreou has been expected to announce measures such as 10,000 immediate job cuts in the public sector. He has also been expected to say that tens of thousands more civil workers are to lose their jobs within the next year.

If these measures are announced, they would be the first mass cuts in the public sector since Greece undertook a bailout plan this spring.

At the end of June, the Greek parliament voted to implement a round of austerity measures in hopes of avoiding defaulting on the government's debt.

That decision came amid a round of large-scale protests in the streets, with riot police firing tear gas.

Demonstrators rejected measures including reductions in the pay of public workers and social security funding and an increase in the attrition of public jobs. Last year, an austerity package included pension cuts, higher taxes, and a hike in retirement age to 65 from as low as 61.

Markets dropped sharply Friday as rumors of a possible Greek default circled the globe. The default could come as early as this weekend. Whether or not something happens in Greece will largely rule market sentiment as the market opens in New York on Monday.

Investors sold stocks Friday in fear that Athens may not get its next installment of bailout money from the European Union, International Monetary Fund and European Central Bank and that the bankruptcy could come to light over the weekend.